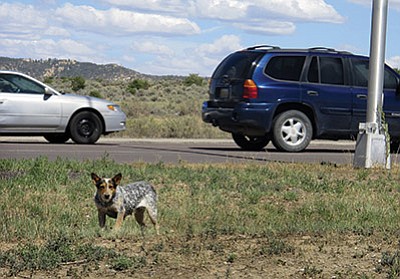 In this file photo taken July 14, 2011, a dog searches for food along a highway median on the Navajo Nation in Tohatchi, N.M. Shaken by a vicious dog mauling that killed a 3-year-old boy on the Navajo Nation, local leaders are expressing anger over the attack, saying encounters with stray and feral animals on the vast reservation are all too common and more could have been done to prevent the tragedy. AP Photo/Jeri Clausing, file

DILKON, Ariz. - Shaken by a vicious dog mauling that killed a 3-year-old boy on the Navajo Nation, local leaders are expressing anger over the attack, saying encounters with stray and feral animals on the vast reservation are all too common and more could have been done to prevent the tragedy.

A report from the Navajo Nation Animal Control Program confirmed the child was attacked in the area of Dilkon, Arizona, on July 14 by a pack of dogs, but it does not list the dogs' breeds or indicate whether they were strays or had an owner. Citing the report, a spokeswoman for Navajo President Russell Begaye said five dogs mauled the boy before authorities arrived on the scene in response to a telephone message of a fatal canine attack.

Two dogs were shot and killed on site, and the other three were euthanized at an animal shelter in Fort Defiance, Arizona, according to the report. All of the dogs tested negative for rabies.

"People have told me that they had reported on these dogs before, but nobody came around until (the attack) happened," said Cecil Hubbell, president of the Navajo Nation's Wide Ruins Chapter, where the boy lived with his mother. "People overlook these things. They don't check up on it, and now we got a 3-year-old boy that is gone."

He criticized tribal authorities and officials for not doing more to enforce laws meant to prevent animal neglect and keep aggressive dogs from roaming free.

Meanwhile, some tribal members took to social media saying their reports of neglected animals resulted in little action from authorities. Others said there were too few dog catchers and animal shelters available on the 27,000-square-mile reservation.

Hubbell identified the victim as Kayden Colter Begay, saying relatives have described him in the days since his death as a smart child who loved animals, including the cattle and horses at his paternal grandparents' home in Seba Dalkai. The small, remote community is part of the Navajo Nation's Teesto Chapter near the Arizona-New Mexico border.

Kayden was visiting his grandparents when the dogs attacked him, Hubbell said. A funeral was held Wednesday.

"This is an amazing kid that we lost," Hubbell said. "That's why we do our best to help the family. But where are the officials?"

The Navajo Nation, like many reservations, has long struggled with how to deal with stray and neglected dogs that roam communities and ranches. A Navajo official in 2011 estimated there were four to five dogs for each of the more than 89,000 households on the reservation, or as many as 445,000 dogs total. The estimate came after a 55-year-old man was found mauled to death in a small community near Gallup.

In a statement Thursday, President Begaye said animal control staff pick up stray dogs and provide other necessary services. He placed much of the responsibility for preventing attacks on dog owners, saying they need to take measures to keep aggressive canines in fenced areas and on leashes, and to spay and neuter their animals.

"It needs to be reiterated that animal owners, specifically dog owners, need to take responsibility in caring for and restraining their dogs to prevent vicious and fatal attacks," he said.

He said the Navajo Nation "suffered a terrible tragedy" with the boy's death.

Amber Kanazbah Crotty, a delegate on the Navajo Nation Council, said tribal justice officials have proposed an amendment that would do more to hold animal owners accountable in neglect or abuse cases. In the long-term, she said, more needs to be done to explore how the government or nonprofits could subsidize spay and neuter clinics.

"Anybody you talk to could tell you stories of close calls" with feral dogs, she said. "It takes this whole comprehensive movement to address feral dogs."