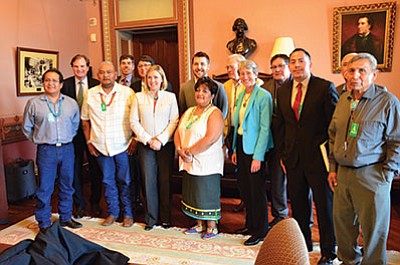 "We had several productive meetings this past week, and were able to share with high level federal officials why the Navajo Nation firmly supports a Bears Ears National Monument designation," Filfred said. He represents the majority of Navajo Utah chapters.

"We were thrilled to learn that Secretary Jewell and Under Secretary Robert Bonnie accepted our Coalition's invitation to visit the Bears Ears," Filfred said. "They will be able to hear from our Navajo people in San Juan County who overwhelmingly support a designation. Navajo leadership is also looking forward to having federal officials learn about the interests of Native American tribes to protect the Bears Ears region in southern Utah."

The landscape within the national monument proposal is the ancestral home of many Southwestern Native American tribes. It is also the birthplace of Navajo Headman Manuelito. Navajo, Ute, Zuni, Hopi, and other Native American people depend on the land within the region to sustain their traditional livelihoods and cultural practices, such as hunting, gathering and ceremonies.

Phelps sponsored legislation in support of the national monument designation, which was unanimously approved by Council members in 2015.

The resolution supports the designation of the 1.9 million-acre Bears Ears National Monument in San Juan County, Utah. Initially, the Nation was hopeful this area could be protected through the Public Lands Initiative as a National Conservation Area; however, the Utah congressional delegation did not give serious consideration to the Bears Ears Inter-Tribal Coalition proposal.

A final PLI has not been produced by the delegation for the Navajo Nation's consideration, or input. Last year, the Bears Ears Inter-Tribal Coalition formally broke away from discussions with the Utah congressional delegation on their long-delayed Public Lands Initiative.

"The five tribes have come together around a vision of collaborative management for the Bears Ears to ensure that these lands will be managed in a manner that protects our interests in San Juan County," Bates said. "Federal agencies will also benefit from tribal contributions to planning and management due to more diverse input to inform decision-making, and increased resources for management and enforcement. We are hopeful that the Obama Administration is giving serious consideration to our request as five unified tribes."