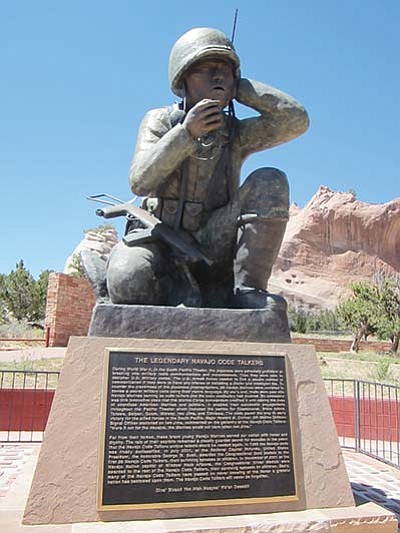 WINDOW ROCK, Ariz. - The buzz this 4th of July was a petition to get a National Native Code Talkers Day on the radar of the U.S. Senate. The campaign was begun by Vietnam veteran and Navajo elder, Niles Aserat. Now a resident of Murfreesboro, Tennessee, Aserat grew up on the Navajo reservation in Sanders, Arizona. He joined the Army in 1966 and saw firsthand the brutality of war. He and only one other man in his brigade of 178 men, survived a vicious ambush at the infamous battle of Hamburger Hill.

As so often happens in American history books, the contributions of a group of volunteer Native servicemen called code talkers, has been understated. Code talkers were warriors doing what they have always been inspired to do - protect their homeland, families and culture. Despite having often been harshly treated for speaking in their Native languages, these warriors valiantly served for the United States and by using their beautiful Native languages these hero soldiers became pivotal in helping to win two of the most crucial wars in U.S. history - World Wars I and II.

After reading a book about code talkers, Aserat found himself inspired to spread the word about their contribution and self-sacrifice, which turned the tide of war in the favor of the U.S. During WWII, military Marine Corps recruiters visited the Navajo reservation and understanding the threat facing their homeland from foreign invaders again, the first group of 29 brave warriors volunteered and developed a sophisticated code which was never deciphered by the enemies.

Aserat said the U.S. military was in a position to lose WWII and without the code talkers, the Japanese could have won.

"The code talkers really took them by surprise," he said. "They were so accurate the Japanese didn't know what to do."

Just over a year ago, Aserat wrote the initial language for a paper petition calling for a nationally recognized day to celebrate code talkers. The petition has been gaining momentum and, with assistance from supporters, it has been ushered into an online petition. He originally started getting signatures by setting up displays at different events such as powwows or tribal gatherings and shared the message while selling his jewelry. With the moveon.org petition now circulating, the campaign is hoping to get many more signatures to help reach their goal of 100,000 as Aserat continues to give lectures and solicit the support of all people.

"Not just Natives are supporting this," he said, "but people of all races."

National Navajo Code Talkers Day is celebrated August 14 - the day Japan announced that it had officially surrendered to the Allies. Then-President Ronald Reagan made the declaration for the day in 1982. In 2007, The Navajo Nation made the day a Navajo holiday, with Arizona recognizing the date in 2014.

Aserat believes that all code talker tribes should be included in a nationally recognized day because of the crucial impact they had on the outcome of the wars they served in. Nativecodetalkers.org, the website created as a resource for the petition says:

"The Cherokee and Choctaw used their languages to help bring a successful end to World War I in 1918. These men served voluntarily for what they considered their country as Congress did not even grant U.S. citizenship to Native Americans until 1924.

It is well-regarded that code talkers from the Navajo, Lakota, Comanche, Seminole, and other tribal nations changed the course of World War II, saving millions of lives.

These men served the United States with valor, especially considering the U.S. government's subpar treatment of American Indians. The code talkers fought for a country that made many legal efforts to terminate their existence and culture. Yet still, American Indians constitute the highest per-capita ethnic group to serve in the Armed Forces, a tradition that stems from the code talkers' legacy."

Aserat asks people he speaks with during his travels to consider how our country might be different if the warrior code talkers had not sacrificed, had not been there to fight to preserve their homelands, their reservations, their cultures and families.

"Consider how our country might be different if they had not created an ingenious unbreakable code to thwart the approaching enemy," he said.