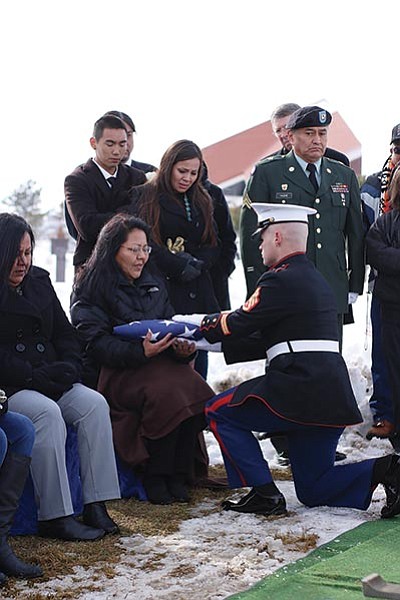 Yazhe served in the Marines Corps from 1942-1946 and was part of the elite group of Navajo Code Talkers, who transmitted battlefield messages in an unbreakable radio code based on Dine' bizaad. Yazhe was stationed and trained as a Code Talker in New Caledonia and fought as a Code Talker in both Guam and Okinawa. He was honorably discharged in 1946. Yazhe passed away from renal failure at a hospice in Holladay, Utah. He was 92 years old.

In a statement Navajo Nation Vice President Jonathan Nez said the Navajo Code Talkers are among the greatest generation of American citizens who put their lives on the line during WWII in defense of freedom and democracy.

"The Navajo language was the secret weapon that brought victory to the Allied Forces and ended the war in the Pacific," he said.

Navajo Nation President Russell Begaye said it is always a great loss when a Navajo Code Talkers passes away.

"Mr. Yazhe was honored and revered not only by our Navajo people but also honored and recognized on a national level," he said. "Our world as it exists today would not be the same had it not been for our Code Talkers and for this we will forever be grateful."

During the service Nez said that Yazhe was among the greatest generation of soldiers who served during World War II.

"He was a Navajo Code Talker," Nez said. "Our heroes are passing and we must take the time to honor and preserve their legacy. We need to share their heroic deeds with our children and our grandchildren."

Begaye also sent his condolences to the Yazhe family for the loss of a Navajo family man and hero.

"It is with a heavy heart that I learned about the passing of Ernest Yazhe, a Navajo Code Talker and a treasure to the Nation," he said. "If it were not for our Navajo Code Talkers, our freedom as we know it today would be severely impacted. The Navajo Nation and the greater United States owe a tremendous debt of gratitude to Code Talkers such as Ernest Yazhe. His service will not be forgotten."

Nez presented a proclamation on behalf of the Office of the President and Vice President honoring Yazhe to his daughter, Melissa Yazhe, who accepted the plaque for her family.

During the services, Yazhe was remembered as a humble and caring man whose life was fulfilled by simple essentials like raising his family, tending to livestock and taking care of his homestead.

Ruth Burton provided the prelude to the funeral services and told people gathered that Yazhe never wanted to have great attention focused on him. He enjoyed the simplicity of his life, she said.

Yazhe's grandson Donovan Baldwin recalled memories he had of time spent with his grandfather. Baldwin portrayed him as a gentle person who would often wake his grandchildren by placing their favorite kittens next to the kids' sleeping bodies.

Baldwin's memories also included a time when he and his siblings had gotten a set of toy walkie-talkies. He said that Yazhe taught them some of the codes he used in World War II. He told his grandchildren that the word for artillery tanks was 'metal turtle'.

"Today, we celebrate the life of Ernest Yazhe, a humble man who always worked hard. Let us also remember his legacy during this time," Nez said when he presented the proclamation to the family. "Thank you for your service and bravery, Ernest Yazhe. Your memory will continue to live on in the annals of American history."

Peaches passed away in the same week as Ernest Yazhe, another Navajo Code Talker who passed away Jan. 12.

"The Navajo people have lost another warrior who defended freedom and the American way of life during World War II," said Navajo Nation President Russell Begaye said. "Navajo Code Talker Alfred Peaches was a role model and hero to our great Navajo Nation. We unite in prayer and mourning for his family and friends."

Vice President Jonathan Nez said the passing of another Navajo Code Talker is a reminder to visit and honor the legacy of those who still carry the secret knowledge that ended the war in the Pacific Theater.

Peaches attained the rank of corporal during his service in the U.S. Marine Corps. He served from November 1943 to May 1946 with the 29th Marines, 6th Marine Division.

He was a combat veteran of the battles of Okinawa, Ryukyu Islands, Saipan, Guadalcanal, Iwo Jima, and the occupation of China. Peaches also served his country again during the Korean War, where he was honorably discharged.

His sons, Vernon and Albert, preceded Peaches in death.