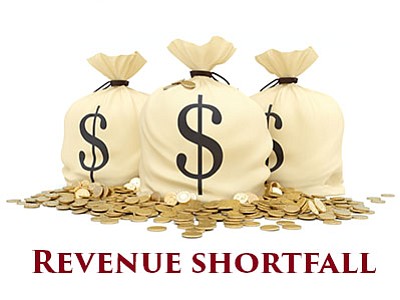 WINDOW ROCK, Ariz. - The Navajo Nation Budget and Finance Committee (BFC) received a report that projects a $2.9 million revenue shortfall, which could affect the FY2016 budget for the Navajo Nation.

The shortfall is calculated from first-quarter results of actual revenue that the Nation received and the revenue projection that was established at the beginning of the current budget cycle.

Appointed Controller Jim R. Parris said the shortfall is because of the drop in oil and gas prices internationally, which significantly impacted the Nation's revenues.

"Right now there is $14 million in the UUFB, and there will be numerous supplemental fund requests," Damon said. "Our request is to get recommendations from you to possibly [see if we need to] hold off on those requests, and say that we actually are going to utilize these dollars to cover the shortfalls."

In response, Parris said the Fund Balance can be used for potential shortfalls, however, his office cannot accurately estimate the revenue projections or if the shortfall would occur because there is not a reliable source to approximate actual revenue outcome. He suggested that the Nation begin implementing controlled spending measures.

"We have resources - so direct them toward economic development and start generating more revenue to meet our growth," Witherspoon said.

Council Delegate Otto Tso (Tó Nanees Dizí) agreed and suggested that the Nation begin to look at cost-saving measures such as promoting tourism on Navajo land, restructuring the annual leave program and increasing the use of technology to do business to reduce travel expenditures.

Bates cautioned the BFC and council members about the use of the Minimum Fund Balance and the Nation's Set-Asides because it could potentially affect the Nation's credit rating, and suggested that they could make amendments to the current FY2016 budget.

"One of the things that could be considered is to amend the budget for FY2016, to reflect the possible shortfall," Bates said. "The question is, to what level would you amend it to reflect the shortfall?"

Bates added that when the Permanent Trust Fund was established, it was to recognize that eventually the non-renewable resources would begin to decline and was designed to be a safety net for the Nation. However, to use the principle amount of the PTF would require a referendum and would need to be passed with two-thirds majority of Navajo registered voters who participate in the referendum election.

Parris requested time to research alternatives and options to begin addressing the potential shortfall. He also stated that his office would look into developing a more efficient system of estimating potential shortfalls, and possibly switching over to a two-year budget system.

"I would honestly like to have the opportunity to really scrub the budget and the assumptions that it was based on in the projections in FY2015 to build a more solid and dependable number for you," Parris said. "I think the recommendation for a two-year cycle is a good one. If you go to that type of cycle, it is a more realistic way to do business."

At the conclusion of the discussion, BFC members agreed to the controller's 30-day study and requested an update report in March to discuss the findings to begin developing possible solutions.