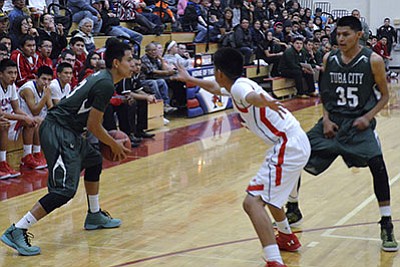 "The mentality of the team was to win," he said. "We need to be the big dog in the yard, tonight. I told 'we need to get out there and take what we want - the win.'"

A fast up-tempo game start for the Roadrunners included storming out to an 18-2 run. It was raining threes. Holbrook's senior Abrian Dickson hit three three-pointers, one to open the quarter and one to close out the quarter. Holbrook connected on five three pointers. Rhett Desiderio and Nathan Johnson each contributed a three pointer.

"I told them, 'patience, patience, settle down, pick up the intensity on defense,'" he said.

The Warriors didn't quit. They put together an 11-2 run and ended the first quarter with a trey by Urijah Yazzie, a buzzer beater, cutting into Roadrunners lead. The Roadrunners led 21-13 going into the second period.

The Warrior went to a 3-2 zone, "that limited our penetration and kicked out to the perimeter offense to knock down some threes," Johnson said.

Dickson scored eight points in the second quarter, hitting two three pointers, one of them a buzzer beater from half court, which empowered the Roadrunners to outscore the Warriors, 10 to 4. The Roadrunner led 31 to 17 going into the break.

With a sizable lead, the Holbrook's coach had a message for his team.

"The game is not over 'til the game clock hits triple zeros and horn sounds," Johnson said. "Stay in attack mode."

The Tuba City coach said the Roadrunners were forcing the Warriors to make a lot of uncommon errors and he gave them a message going into the half for his players.

Holbrook's Benson Davis hit two treys in the third frame and Dickson added one more trey, his 22 point of the night and a game high for him. Holbrook hit 10 three pointers for the night. The Roadrunners increased the lead with a 13 to 9 point third period and led 44 - 26.

Holbrook, leading by 18 points, substituted freely allowing the bench to get some experience in post season action.

"Tuba City is one off the better teams in our section," Johnson said. "They don't give up. He reminded [the players] to stay in attack mode."

Tuba City's Austin Foster found Samthony Parrish, in the paint for a bucket. Yazzie scored again after a steal, which cut into Holbrook's lead briefly. A Roadrunner 5 to 0 run, rebuilt the Roadrunners lead to 21 points. Yazzie's three baskets and Roland Becenti two treys closed out the scoring for Tuba City. The final score was 53 to 42, in the Roadrunner's favor.

"Tuba City is one of the better teams, they work hard, hardest working team out there and they don't give up," Johnson said, in a post-game interview, "Give credit to Tuba City, they went to a zone defense and it stopped us from getting wide open threes."

The Holbrook Roadrunners were led by Dickson, with 22 points, Nathan Johnson added 9 points, followed by Benson Davis with eight points.

"Our defensive intensity was right there but we did not capitalize on the stops," Brown said. "Our offense level wasn't there tonight."

The game between Holbrook Lady Roadrunners and the Tuba City Lady Warriors was also a very important Arizona Sectional III game because all teams are contending to be one of the four teams that will qualify for the Arizona State Section III tournament at the end of the season.

Tuba City's Kourtney Posey drive through the paint for quick score, which was answered by Holbrook's Dakota Dick with a three pointer for an early 3 to 2 lead. Lady Warriors Keisha Classay and Autumn Byjoe combined for 7-0 run midway through the first quarter. Tuba City hung onto a 9-3 advantage.

Holbrook Twyla Clark's old fashioned three pointer started an 8-4 run, cutting into Tuba City's lead with a score of 13 to 11. Back to back plays by the Roadrunners' Quanyyah Lester, who found Laurie Brown on the baseline for scores, gave a brief lead to Holbrook 15 to 13. The Lady Warrior's 5-0 run, including buckets by Classay and Byjoe, ended the first quarter with Tuba City leading 18 to 15.

The Lady Roadrunners combined for an 11-0 run opening the second quarter, with Ariyana Pratt and Tyler Pacheco hitting a three pointer. Aiyana Gary penetrated the paint for lay ups, giving Holbrook the lead for good at 26 to 18. The Lady Warrior's 13 to 8 run brought them back within three points of the lead but they trailed 34-31 heading into intermission.

During the start of the second half, Holbrook and Tuba City traded points, basket for basket. But the Lady Roadrunners outscored the Lady Warriors, 12 to 10, and held on to a 46 to 41 score as the third quarter ended.

The Lady Warrior's Classay, Posey, Tatyana Antonio and Sydney put together a 12-8 run, closing the gap within a point, 54-53 with two minutes left in regulation. The Lady Roadrunner's 7-2 finish, closed out the game. The final score was 61 to 56.

Laurie Brown had led the Lady Roadrunners with 11 points. Keisha Classay had a game high 18 points for the Tuba City Lady Warriors followed by Posey and Byjoe, each contributing 12 points.