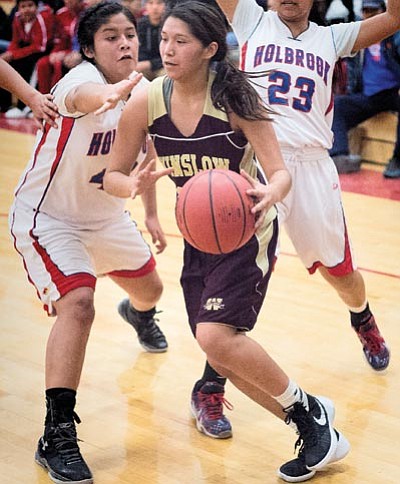 The Lady Sand Devils started very strong and had a 16-3 lead after the first quarter.  Winslow played much better in the second quarter but still trailed 25-17 at the half. Page increased its lead to 43-27 after three quarters of play.

The Winslow Lady Bulldogs defeated the Mingus Lady Marauders 645-37 at Cottonwood Jan. 11. The win improved Winslow's record to 8-10 for the season and dropped Mingus's to 5-13. The win also ended a four game losing streak for the Lady Bulldogs.

James of Winslow was reported to have scored 22 points but no other quarterly or individual scoring was available.

The Lady Bulldogs fell to the Holbrook Lady Roadrunners 69-56 in Holbrook on Wednesday and were scheduled to journey to Page to meet the Page Lady Sand Devils Jan. 15. A busy week was to begin on Tuesday when they hosted the Monument Valley Lady Mustangs and continue Jan. 20 when they host the Snowflake Lady Lobos. They are to host the Tuba City Lady Warriors on Friday and have a rematch with the Holbrook Lady Roadrunners on Saturday.