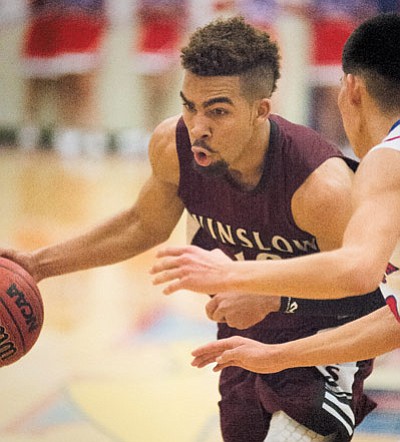 Winslow Bulldogs’ Nathan Hollins drives toward the basket on the way to a 56-53 win against Holbrook Jan. 13.Todd Roth/NHO

The Holbrook Lady Roadrunners' win improved Holbrook's record to 10-9 for the season. Winslow fell to 8-11 with the loss.

The Lady Roadrunners closed the first quarter strong and had a 15-10 lead going into the next period. The second quarter was played on even terms and Holbrook took a 27-21 lead to the locker room at the half.

Holbrook had an 18-point lead in the fourth quarter but the Lady Bulldogs came back strong and got the deficit under 10 points. Holbrook led 51-39 going into the final period with both teams having key players in foul trouble.

Ariyana Pratt led Holbrook's attack with 23 points but Danielle James of Winslow was the game high scorer with 24 points. Quanyyah was also in double figures for the Lady Roadrunners with 18 points and Tyler Pacheco scored nine for the victors. Jenna Yazzie scored 10 points and Justine Butterfield tallied nine for the Lady Bulldogs.

The Lady Bulldogs travelled to Page to meet the Page Lady Sand Devils Jan. 15. A busy week began Tuesday when they played host to the Monument Valley Lady Mustangs and continue Jan. 20 when they took on the Snowflake Lady Lobos. Winslow will play host to the Tuba City Lady Warriors on Friday and have a rematch with the Holbrook Lady Roadrunners on Saturday.

In the nightcap the Winslow Bulldogs came from behind in the second half and defeated the Holbrook Roadrunners 56-53. The win improved Winslow's record to 14-4 and dropped Holbrook's to 17-4.

Nathan Johnson led Holbrook and all scorers with 17 points. Both teams had three players in double figures. Akeem Foster led Winslow with 14 points and Rory Billie and Nate Hollins each scored 13 for the Bulldogs. Abrian Dickson with 12 points and Benson Davis with 11 were in double figures for the Roadrunners.

The Roadrunners started strong and had a 16-10 lead at the end of the first quarter. Holbrook added to their lead in the second quarter and had a double digit 32-21 lead at the half.

The Roadrunners hit eight three-point shots in the first half for most of their scoring. Winslow rallied in the third quarter and cut the Holbrook lead to a single point 40-39 and took the lead in the first seconds of the final period.