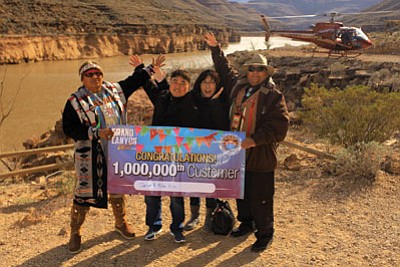 PEACH SPRINGS, Ariz. - On Dec. 21 venues at Grand Canyon West recorded one million visitors for 2015. The record-breaking milestone was celebrated by treating Jenny and Mike Kim, the 1 millionth visitors, to a Grand Adventure Tour, including a helicopter and pontoon ride, lunch and horseback ride to the West Rim, Skywalk trip and a visit to Guano Point.

"This is a very special moment for the Grand Canyon West, the corporation and for all of our employees," said Sherry Counts, Hualapai Tribal Council chairwoman. "One million visitors represents an increase of more than 120,000 guests in the past year alone. That's huge - and these attractions will continue to get better in the year ahead. A new visitor center, a new restaurant and other new attractions means more reasons for people to visit in 2016. We want every day and every visit to be memorable for one and all."

According to Counts, the Hualapai Tribe has benefited in a number of ways from the success at Grand Canyon West.

"We've been able to improve the electrical and water systems at Grand Canyon West, along with continuing to provide housing for our employees at the site," she said. "Just as importantly, our tribe has been able to invest in our members, by constructing new facilities for healthcare, and for our youngsters, including our Head Start program, academic scholarships and our Boys and Girls Club. Grand Canyon West plays a big role in the self-sufficiency of the Hualapai people."

In 2013, Grand Canyon West attractions combined to host around 827,000 visitors. In 2014 that number rose to 882,000 visitors. The jump to top one million visitors represents an increase of more than 13 percent in the past year.

"This has been a fantastic year in terms of business for Grand Canyon West, for the Hualapai Tribe, for tribe members and for the region," said Mark Mortenson, CEO at GCRC.

"The Tribe and its members' commitment to economic development and to the attractions and experiences that comprise Grand Canyon West remains strong," Mortenson said. "One million visitors to Grand Canyon West in the past year means more revenue for the region, more jobs and better quality of life for so many residents. We look forward to performing even better in 2016 and continuing to drive the tourism industry across the region."

More information or to purchase tickets to Grand Canyon West attractions can be found at www.grandcanyonwest.com.