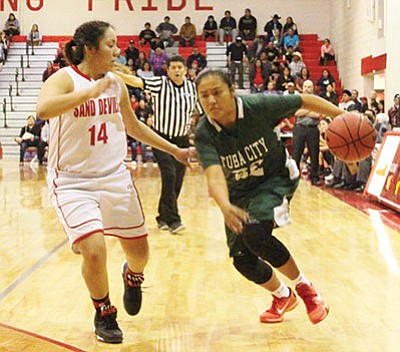 The No. 4 seed Chinle Lady Wildcats held off No. 13 seed Betty H. Fairfax by a score of 54-51 at the Nash Center at Monument Valley High School in Kayenta, Arizona.

The Wildcats will travel to the Gila River Arena, in Glendale, Arizona Feb. 25 to play the No. 4 seed Safford Lady Bulldogs. The game is schedule for a 10:30 a.m. start.

"We played well enough to win, we play a quick team tonight and we will learn from the film," said Chinle Lady Wildcats head coach Pete Butler. "We'll take it (the win) and move on to the state tornament."

Chinle's Nahataba Nacona and Kalii Hunter combined for 28 points to hold off the Betty H. Fairfax Lady Stampedes in the closing seconds of the game.

The Stampede's Jakayla Lowery put up a WNBA range three-pointer to send the game into overtime but it skipped of the rim with no time left on the clock.

The Stampede led at the end of opening quarter 15-8 and were down to the Wildcats 24-3 at the half.

The Arizona State Girls Basketball defending champions are headed back to Gila River Arena after a win.

The Page Lady Sand Devils will play Arizona Division III Section I rival the Lady Scouts of Window Rock, who are the No. 7 seed for the state tournament, at 4:30 p.m. Feb. 25.

The No. 2 seed Page Lady Sand Devils held back upset minded No. 15 seed Tuba City Lady Warriors with a 50-48 win.

The game was tied nine times and the lead changed hands a total of 16 times.

"We are confident and we are playing to repeat as state champions," Dempsey said.