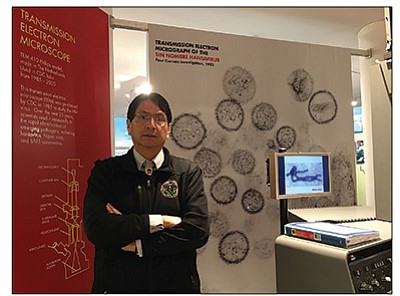 Navajo Nation Vice President Jonathan Nez met with officials from the Centers for Disease Control and Prevention on public outreach for hantavirus awareness Feb. 10 in Atlanta, Georgia. The CDC will work with the Navajo Nation on prevention efforts for hantavirus and O.lupi. Submitted photo

ATLANTA - Navajo Nation Vice President Jonathan Nez met with officials from the Centers for Disease Control (CDC) about public outreach, awareness and prevention of hantavirus and O. lupi on the Navajo Nation Feb. 10 in Atlanta, Georgia.

Nez said the Navajo people must be proactive in prevention efforts after a girl from Cameron died from complications from hantavirus Jan. 13.

"We want to be proactive in this partnership," Nez said. "We got the family relocated out of their home and into a Navajo Housing Authority home. Once it's time for spring cleaning, we must disclose full information on prevention of hantavirus and educate our Navajo people."

Del Yazzie, an epidemiologist with the Navajo Epidemiology Center, said the Navajo Nation is partnering with the counties and state of Arizona, including the federal government, to prevent hantavirus and also O. lupi, which involves infection of a parasitic worm that is transmitted by black flies - an emerging threat on the Nation that infects dogs and humans.

There have been two cases of O. lupi on the Nation in Chinle, Arizona and two cases in Farmington, New Mexico.

Other diseases are also a concern on the Nation.

"Rocky Mountain Spotted Fever could still be a problem," said Dr. Pierre Rollin, deputy branch chief for the Viral Special Pathogens Branch of the National Center for Emerging and Zoonotic Infectious Diseases. "If we're going to have a lot of rain because of El Nino, I think a lot of animals are going to be able to grow in a large quantity. Rocky Mountain should be on the radar, just in case."

Rollin cited the Ramah Project from the mid-1990s, which provided rodent-proofing education about hantavirus to the Navajo people.

"At the time, we trained some local people to inspect houses and helped them to rodent-proof them," Rolling said. "People can do this. There are things they can do to protect themselves."

"We can provide direct assistance with creating public information materials and tailoring those messages in the best way that will reach the people most effectively," she said.

She also said an Epi-Aid is a possibility. An Epi-Aid is a mechanism for public health authorities to request short-term epidemiologic assistance of Epidemic Intelligence Service (EIS) officers to respond to a public health problem. It allows for rapid response by officers who assist in investigating an infectious or non-infectious disease outbreak, natural or manmade disaster, or other public health emergency.

Knust said an Epi-Aid would include working with area hospitals to provide awareness on hantavirus symptoms to ensure advanced care is provided to patients that may have signs of an infection.

"The idea is that we would try to collect blood samples from residents who own dogs and sample their dogs at the same time," she said.

She said the CDC would like to partner with spay and neuter mobile services provided by Dr. Glenda Davis, who is with the Navajo Nation Veterinary Program.

The CDC is working with the Navajo Technical University for the research project and upon approval will begin testing on the Navajo Nation.

"I am from western Navajo," Nez said. "When I say people are scared, they are scared, especially after someone has died from the hantavirus. We are working with the experts and our dialogue in Atlanta will go a long way toward these prevention efforts."

More information is available from the CDC at www.cdc.gov/hantavirus.