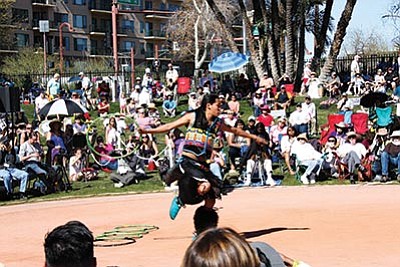 PHOENIX - Twenty-six year old Nakotah LaRance won the top prize for the second year in a row with another blazing performance at the 26th annual World Championship Hoop Dance competition held at the Heard Museum Feb. 13-14. He beat Dallas Arcand by six points.

With unseasonable warm temperatures in the 80s, the dancers spun and leapt to the beat of Native drums and singers. The event showcases each dancers' artistry, athleticism and cultural traditions as they tell stories with the hoops that create intricate symbols of animals and symbols that hold great meaning for Native tribes. Over time, the intertribal hoop dance has expanded to incorporate new and creative designs and extremely intricate footwork. Individual routines can consist of as few as four hoops to as many as 50 hoops.

Men and women both compete on an equal field with performances lasting sometimes six minutes in the warm sun. Top American Indian and Canadian First Nation hoop dancers were among the participants.

Dancers are judged on a slate of five skills: precision, timing/rhythm, showmanship, creativeness and speed.

Last year, LaRance beat seven time world champion hoop dancer Derrik Suwaima Davis by a few points to claim the championship. LaRance called Davis his master teacher - and the one who made LaRance his first set of hoops.

One of the highlights this year was the hoop dance by Jones Benally of the Jones Benally Family, who is one of the oldest, active hoop dancers. He is also the Heard Museum's Hoop Legacy Award recipient. He is in his 80s but does not know his exact birth date. The crowd and dancers alike were in awe as Benally performed his dance with willow hoops. The dancers lined part of the hoop dance circle to honor his tradition of passing on tradition.

"We teach our kids to carry on, to learn," Benally said before his performance.