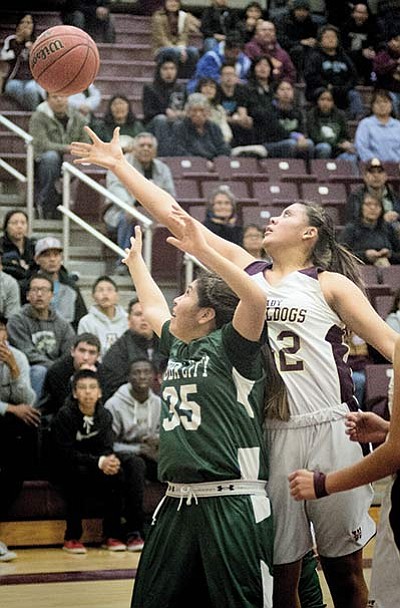 WINSLOW, Ariz. - The Winslow Lady Bulldogs defeated the Chinle Lady Wildcats 46-36 Feb. 5 to end their regular season with five straight wins to improve their season's record to 14-15 and improve their chances for berths in post season play.

The Lady Bulldogs defeated the Tuba City Lady Warriors 57-53 in an important game at Winslow. The win improved Winslow's record to 12-15. Tuba City fell to a still impressive 12-10.

The Lady Bulldogs started strong and built a double digit 17-7 lead at the end of the first quarter. Tuba City hit several late three-point shots and cut the Winslow lead to 26-22 by the half.

The Lady Warriors came back and tied the game with just over a minute to go in the third quarter and took a 38-36 lead going into the final period.

Much of the fourth period was played with the score tied or the teams exchanging leads.

Autumn Byjoe led Tuba City and all scorers with 18 points but was the only Lady Warrior in double figures.

On Feb. 2 the Lady Bulldogs defeated the Many Farms Lady Lobos 69-29 in an important game for Winslow at Many Farms. The win improved Winslow's record to 13-15.

The Lady Bulldogs built a 20-6 lead in the first quarter and were in control 39-17 at the half. The margin was 60-24 after three quarters.

Danielle James led all scorers with 20 points for Winslow and was the only player on either team in double figures. Singer scored nine for Winslow and three Lady Bulldogs scored eight points. Eleven Winslow girls scored. Many Farms did not have a player with more than six points.

On Feb. 5 in the final game of the regular season the Lady Bulldogs defeated the Chinle Lady Wildcats 46-36 in a game which could have importance in possible post season play.

The win improved Winslow's record to 14-15 for the regular season. Chinle fell to a still impressive 17-4. The Lady Wildcats will likely have good seeding in the sectional and state tournaments.

James led all scorers with 18 points for Winslow. Singer was also in double figures for the Lady Bulldogs with 13 points. Yazzie tallied seven for Winslow which only had six players score. Kalli Hunter led Chinle with 13 points and Quannah Ryan was only a point behind her with 12 points. Chinle only had four girls score.