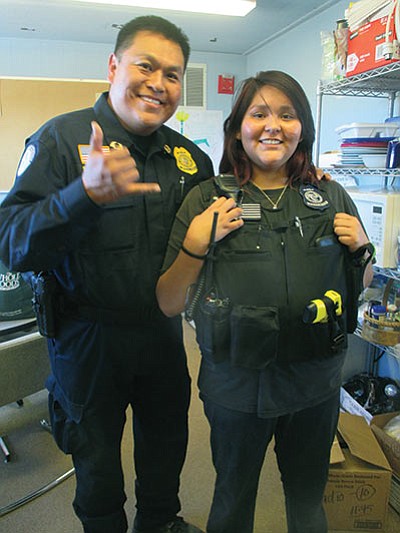 Kootswatewa said police brutality is a big issue in the national news. He said there are bad cops just like there are bad apples in every profession.

He said sometimes police have just a few seconds to respond to a situation and said police are trained not to shoot to kill, but to stop the suspect if he or she has a gun or a knife. Too often, that means shooting them in the center mass, which is the chest area.

Kootswatewa said terrorism, or mass shootings, are meant to cause fear and cause the most amount of causalities. This is why the police are working with schools and the health care center on active shooter drills.

"Now officers are trained to go to the threat," he said.

Kootswatewa said drug and alcohol abuse on the Hopi Reservation is increasing.

"It's getting worse from the standpoint that 75-80 percent of our calls are related to drugs and alcohol," he said.

Considering that the Hopi Police get 8,000-10,000 calls per year, he said that's a lot of crime because of drugs and alcohol.

Kootswatewa said the large amount of calls is responsible for some slow response times from the police. He said the Hopi Police Department has two to five officers on at any given time. If they get called to a stabbing then two officers will be on that case for hours possibly delaying a response to less important calls.

He said the usual response time might be about 20-25 minutes because everything on the reservation is spread out.

"If it's not an emergency we can't use our sirens or lights," he said. "It's not that we choose not to respond to a call."

There was one case where a defendant showed up to court drunk. Court personnel called the police, located right next-door, and it took more than an hour to respond. Kootswatewa said he was not aware of this case, but it was possible that all officers were out on patrol at the time. He said he would have responded if he were there at that time.

There are 16 police officers on the Hopi Police Department and Kootswatewa feels that they would have better response times if they can get up to 20 officers. He said there are four who are going through the hiring process.

Kootswatewa said the BIA decides the Hopi Police Department's budget. He said they need more cars and more specialty officers who are trained in drug recognition and gangs.

Kootswatewa said violent crime has been increasing on the Hopi Reservation for the past five to 10 years. He said the violent crime usually involves knives, but sometimes involves guns or bats. One recent case involved a stabbing where the woman was coming down from meth.

Kootswatewa would like to see School Resource Officers at most of the Hopi schools. He said this would help with K-9 searches and educating students. He said educating parents about drugs and alcohol would also help.

"Parents have to be willing to talk to their kids about drugs and alcohol. It's uncomfortable for most," he said.

Kootswatewa said the Hopi Police spend about 90 percent of their time helping people with problems.

"We also act as social workers because people don't have enough money and that causes a lot of problems," he said.

Kootswatewa said he grew up poor, which taught him to be respectful and humble.

"When you grow up poor you don't have a lot to be proud of," he said.

"There's always somebody worse off than you," he told the students.

Kootswatewa said he grew up hating cops because his dad was always in trouble.

He said in order to become police officers applicants must have a clean record. This means not using marijuana more than 20 times and never using hard drugs like cocaine. Applicants must take polygraph tests.

He told the students that beginning officers start at $43,000 per year. Applicants must be 21 years old, but he wants to start an Explorer program, which would enable future police officers to start training at 16 years old.

As chief, Kootswatewa is in charge of patrol officers, corrections, dispatch and the budget he has to work with.

"I enjoy sharing information," he said. "The more transparent we are the better. Sometimes our response times are slow, but that's because we're overwhelmed with calls for service. We prioritize with safety and property in mind."