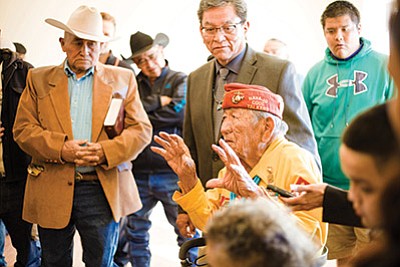 TUBA CITY, Ariz. - World War II veteran and Navajo Code Talker Dan Akee's one wish on his 94th birthday, which was Veterans Day, was to return home to a house he built 60 years ago in Tuba City, Arizona.

On Feb. 6, his wish came true. In an emotional homecoming, in front of volunteers and family who made the day possible, Navajo Nation President Russell Begaye wheeled Akee into the living room of his renovated house. He had spent the previous two days in the hospital with pneumonia.

Akee, overcome with emotion, spoke about the hard days of the bloodiest fighting at Iwo Jima when his only wish was to go home.

"I'm very happy," he said, sitting in his new living room next to his wife Margaret and surrounded by family, friends and volunteers. "It's a beautiful place...to every one of you, I want to thank you for being here. It's very beautiful."

The day would not have been possible without Red Feather Development Group, a nonprofit with offices in Flagstaff, Arizona and Bozeman, Montana. The group partners with Native American communities to develop and implement sustainable solutions to the housing needs in their communities.

Three months ago, Red Feather spearheaded the project with the help of the Western Agency of Navajo Veterans Affairs to renovate the home, which was in dire need of repair. The complete renovation included replacing the roof, windows, exterior doors, electric head, insulation, a complete bathroom overall, drywall, wheelchair access ramp, flooring, painting the exterior and interior, cabinets, plumbing, appliances, gutters and a porch. The entire house needed to be accessible because Akee is in a wheelchair.

Eunice Begay, veteran service officer for the Western Agency of Navajo Veteran Affairs, said that everyone in the room played a role in getting the house finished - a much bigger task than anyone thought at the beginning. A construction crew from the Department of Veterans Affairs completed the new roof, the replacement of all the windows and updated the structural frame of the house, all in record time.

In addition, with the help of other volunteers and donations there is a new bathroom to accommodate Akee's wheelchair and a kitchen with new appliances. Crews of volunteers fully insulated the house, dry walled and painted the inside. Two bathrooms were completely remodeled and new floors were installed throughout the house.

"This is what we can do as a community," Begay said. "Anything is possible. It took a lot of work. I wanted to convey my appreciation to each one of you. I just don't have the words to say how much you made this possible for Mr. Akee."

Navajo Nation President Russell Begaye said the transformation of the house was amazing. He and his staff helped to knock out windows and get the house gutted for the renovation. He said the project would not have been possible without Red Feather Development Group and Mark Hall, the executive director of the organization.

"We appreciate you, as an organization, really stepping up and doing this," Begaye said to Hall. "Really thank you for the big heart you guys have for our Code Talkers, especially right here in Tuba City. You guys demonstrated to the rest of the Navajo Nation what Tuba City and the surrounding communities can do. Thank you."

Shelly Begay, from the Navajo Hopi Honor Riders, said paying honor and respect to veterans is something the Honor Riders do year round - to the ones who come home and to the ones who do not make it. She wants all veterans to receive support while they are alive and with their communities.

"We remember all of them," she said. "It just really fills my heart to be able to tell him thank you and see this love and support for him and his family. What I would really like to see is the other Code Talkers, the other veterans, those who have come back, those who have been forgotten to receive something like this. I want to say thank you to our riders because they are the ones who make us who we are."

Hall said Feb. 6 was a day all the volunteers and workers had been waiting to share with Akee, his wife Margaret and their family.

The house was blessed by Akee's pastor, followed by a ribbon cutting and recognition of sponsors Arizona Public Service, Home Depot, Operation Enduring Gratitude and more than 15 other large donors. Red Feather raised more than $30,000 on www.generosity.com from individual donors throughout the United States and abroad. Local businesses and national corporations donated another $50,000 of in-kind services and goods. The secret to the success of the project was more than 3,200 hours in volunteer labor donated by more than 120 high school students, veterans and community members of Tuba City, Phoenix and Flagstaff.

Hall said most of his gratitude is reserved for Akee, for everything he did for the rest of the nation in his military service.

Hall said Red Feather will put on a community celebration Feb. 13 from 1 p.m. to 3 p.m. at the First Baptist Church in Tuba City to honor and thank the volunteers for their time and effort.