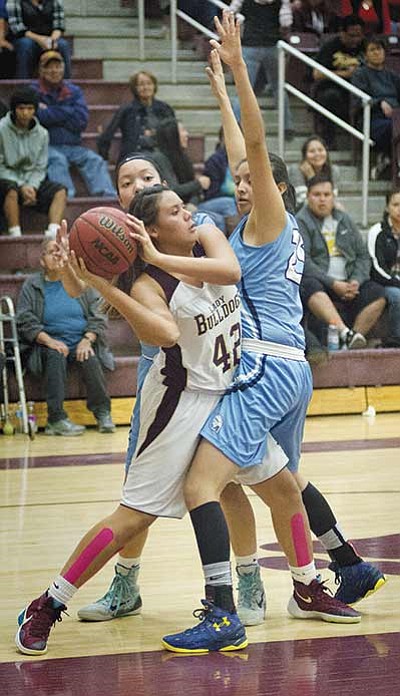 WINSLOW, Ariz. - The Winslow Lady Bulldogs got two important wins Jan. 27 and Jan. 29 in their effort to win a berth in the playoffs.

The regular season ends this week and the Lady Bulldogs will probably need a couple of victories in games against Tuba City, Many Farms and Chinle.

On Jan. 27 the Lady Bulldogs defeated the Higley Lady Knights 55-12 in Gilbert.

The win improved Winslow's record to 10-15 for the season and Higley's record dropped to 3-15.

The Lady Bulldogs thoroughly dominated Higley leading 23-0 after the first period, 38-7 at the half and 54-9 after three quarters.

Justine Butterfield led all scorers with 13 points and Jenna Yazzie was also in double figures with 12 points. Nine Lady Bulldogs scored while Higley had no player with more than four points.

On Friday the Lady Bulldogs defeated the Window Rock Lady Scouts 58-43 in Winslow.

The win improved Winslow's record to 11-15 for the season and dropped Window Rock's record to a still very impressive 19-8. This win was important for the Lady Bulldogs and may help them earn a berth in the post season playoffs.

Winslow dominated in the first quarter and sped to a double digit 21-6 lead.

The second quarter was evenly played and low scoring. Winslow took a 29-13 lead into the locker room at the half.

The third quarter was also evenly played and ended with the Lady Bulldogs leading 41-24. Window Rock cut the lead to 10 points early in the final period but Winslow pushed it back up to ensure the victory.

Danielle James led all scorers with 23 points for Winslow. Adrianna Singer had 18 points and Justine Butterfield nine for Winslow. D'Ovionn Wagner was the only player in double figures for Window Rock with 10 points.