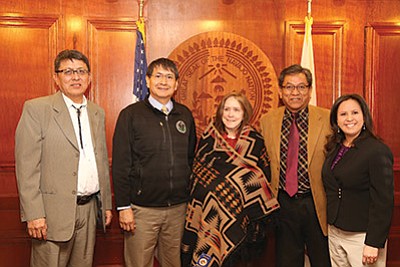 WINDOW ROCK, Ariz. - The assistant secretary of the Army Corps of Engineers visited the Navajo Nation Jan. 27 to discuss establishing a partnership with the Nation to address the Bennett Freeze area.

Begaye gave a brief history of the Bennett Freeze area to Darcy and her staff.

"We need repairs to windmills that supplied water for ranchers and home owners in this area," Begaye said. "In addition, repairs are needed to our reservoirs with much needed earth moving equipment."

Nez said a resource action team has been organized to address the area.

"We will have four technical teams who will work together: economic and community development, housing, infrastructure and public safety," he said.

Nez also discussed finding a Navajo name for the initiative, which would empower Navajos living in the region and end the stigma that has been associated with former commissioner Robert Bennett, he said.

Darcy and members of her staff also participated in the interagency collaboration meeting, which included Navajo Nation departments, the Bureau of Indian Affairs, the Environmental Protection Agency, the Navajo Housing Authority and the Navajo Tribal Utility Authority.

The Army Corps of Engineers has committed to assisting the Nation with its efforts in watershed management and planning. The Corps had assisted the Nation in the past with mapping and flood plain delineation, both of which are essential for smart development.

"Will the Navajo Nation be applying for the Promise Zone designation?" Darcy asked.

Begaye said the Nation has a team working on the application and he is confident the Nation will be selected as a designee.