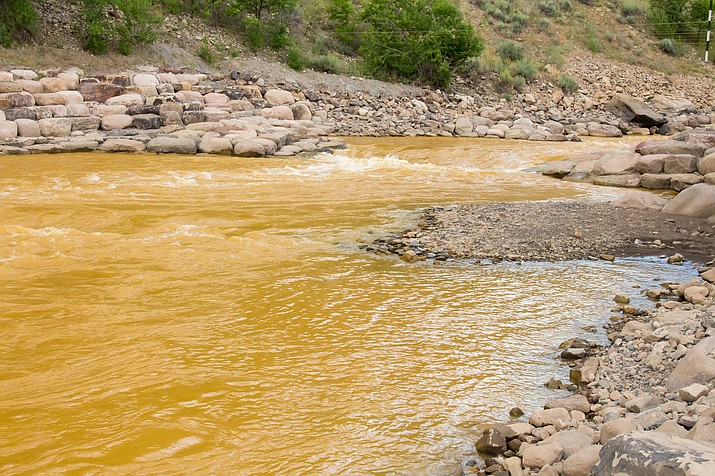 Orange hued river water due to an accidental spill of toxic mine waste by the EPA. Photo/Adobe stock image

WINDOW ROCK, Ariz. — The Navajo Nation is seeking more than $160 million in damages and for alleged ongoing injuries caused by the August 2015 Gold King Mine spill, which released millions of gallons of toxic wastewater into one of the tribe’s significant waterways.

The Navajo Nation Department of Justice has filed a claim against the U.S. Environmental Protection Agency (EPA) for $159 million in damages and $3.2 million to cover expenses already submitted that have yet to be reimbursed, the tribe said on December 5.

The EPA admitted responsibility for the spill but has not yet compensated Navajo residents for the damage or guaranteed that the water is safe to use. The Navajo already filed a lawsuit back in August alleging that the three-million-gallon spill could have been prevented, but it did not specify damages.

“The spill has transformed our sacred river — once the life-giver and protector of the Navajo people — into a threat to our people, our crops and our animals,” Navajo Attorney General Ethel Branch said in the tribe’s statement. “In particular, it has impaired our ability to maintain the cultural, ceremonial and spiritual practices that undergird the Navajo way of life.”

The Navajo aim to hold the federal government accountable for the breach and force the EPA to provide relief to hundreds of residents still reeling from the spill. The money will be used for long-term ecological monitoring, water treatment, construction of an alternative water supply and the ongoing monitoring of the cultural, psychological and physical health of the Navajo people.

A seven-page letter from the Navajo Nation to EPA claims officer Kenneth Redden alleges the agency knew the mine was at risk for a blowout and “ignored warning signs for years,” the letter states, but adds that when the breach occurred, crews were “entirely unprepared to deal with the colossal damage it had unleashed.”

The letter goes on to accuse the EPA of failing to notify Navajo residents of the spill for nearly two days. Meanwhile, at least 880,000 pounds of heavy metals surged toward the reservation, turning the water a mustard yellow. The spill “fundamentally altered economic, cultural, ceremonial and spiritual practices that support the Navajo way of life,” the letter notes. Moreover, it happened near the end of the 2015 growing season and decimated crops, forcing tribal members to shut off irrigation, confine livestock and haul their own water and food.

Water flows through a series of sediment retention ponds built to reduce heavy metal and chemical contaminants from the Gold King Mine wastewater accident, in the spillway about a quarter mile downstream from the mine, outside Silverton, Colorado, Aug. 14, 2015.

“But the San Juan is more than just a source of water for agriculture and livestock,” the letter states. “It is the lifeblood of the Navajo people. It is a bastion for ancient heirloom Navajo seed strains that the Navajo people — the Diné — have cultivated over time to survive in the arid region. It is a sacred, spiritual icon that connects the Navajo people to their ancestors through time.”

The letter also claims that, 16 months after the spill, the contamination continues to harm the Navajo Nation “and will do so for years to come.” The EPA has admitted that the Gold King Mine is one of 161,000 abandoned mines in the western United States — 33,000 of which are degrading the environment — and many have been leaking toxins into the water for the better part of a century.

The lawsuit, the second the Navajo Nation has filed against the EPA in the aftermath of the spill, comes as farmers and ranchers continue to plead for relief. Those who live closest to the river — and rely on it for their livelihoods — have been asking questions for nearly a year and a half, but the EPA is slow to provide answers.

During a Nov. 17 meeting in Shiprock, New Mexico, the largest farming community along the San Juan River, representatives from three regions of the EPA tried to quell fears. The meeting came two months after the EPA designated as a Superfund site the Bonita Peak Mining District, an area in southwest Colorado that includes Gold King Mine as well as 47 nearby “mine features” identified as top polluters.

A Superfund designation puts federal priority on the area and frees up funding for remediation of abandoned mines, but full cleanup may still be decades away, said Enrique Manzanilla, director of the Superfund Division for EPA’s Region 9.

Known as one of the worst environmental disasters in recent history, the Gold King Mine spill simply called attention to an ongoing problem in a mining district that once served as the primary economic driver for a chunk of Colorado. The last mine closed in 1991, but contamination from the district has largely been ignored.

“The Gold King Mine incident really reawakened the issue of abandoned mines,” Manzanilla said. “It caused a realization that we need to look at the mines near Silverton that release waste into the rivers, and have for many decades.”

Although water seeping from Gold King Mine now is treated before joining the Animas River, millions of gallons of the same toxins from dozens of other abandoned mines continue to drain into the river. In fact, on a daily basis, more than 5.4 million gallons of water contaminated with heavy metals flows into the Animas River from the Bonita Peak Mining District.

“I understand the apprehension, especially when we talk about the bigger picture, the long-term impairment of water quality from the mining district,” Manzanilla said. “Maybe in my lifetime we can take care of the 5.4 million gallons.”

The EPA already has sunk $29 million into cleanup efforts following the spill, but abandoned mines can cost as much as 52 times more to resolve than other Superfund sites, the federal agency stated in a report released one year after the spill. When the EPA designated the Bonita Peak Mining District as a Superfund site, it marked the beginning of what will be a very expensive, “very long term project,” said Rebecca Thomas, remedial project manager in charge of the Superfund site.

The EPA is trying to understand where the water is coming from, the “nature and extent” of the contamination, the best ways to clean it up, and the ecological risks it poses, Thomas said.

“I think Superfund is one of the best ways to understand a problem that is so complex,” she said. “The Gold King Mine was one site, but we still have 47 more.”

Part of the solution is ongoing water quality monitoring. The Navajo EPA, armed with grant funding from the federal agency, is sampling the water and sediment at 15 locations along the San Juan River, said Steve Austin, senior hydrologist with the Navajo EPA’s Water Quality Division.

Crews will monitor the river during the 2017 growing season, beginning with spring runoff and continuing through July, Austin said. Based on this year’s test results, the Navajo EPA predicts water quality to be “within safe standards” next year, and the agency recommends irrigation canals remain open.

That’s not good enough for Navajo ranchers and farmers who want assurance that they’re not poisoning their crops or livestock. Most have grown weary of technical language and pledges that help is on its way.

More than 100 chairs were set up for the Nov. 17 meeting, which brought in representatives from EPA regions 6, 8 and 9 and promised to address concerns. Fewer than 20 people attended, however, and those who brought questions left without concrete answers.

“What I want is to know when the problem will be fixed,” said Darlene Whitehorse, who farms along the San Juan River. “The EPA keeps telling us to trust them, that they’re going to help us, but this problem is going to continue for a long time.”

Like most farmers, Whitehorse stopped watering her crops immediately after the spill, losing an entire season’s worth of income. Restrictions were lifted on river use for the 2016 growing season, but during harvest sales, customers shied away from corn, melons or squash grown in the San Juan River valley, Whitehorse said.

“They asked where it was grown, and when they found out we used river water to irrigate, no one would buy it,” she said. “Now I’m feeding it to my grandkids, but I don’t know for sure if it’s safe.”

While the EPA continues to talk about abandoned mines and contamination that will take decades to resolve, farmers and ranchers are left without clear answers about the status of their water.

“This means nothing to us,” Whitehorse said. “We just want to know when we can trust the river.”