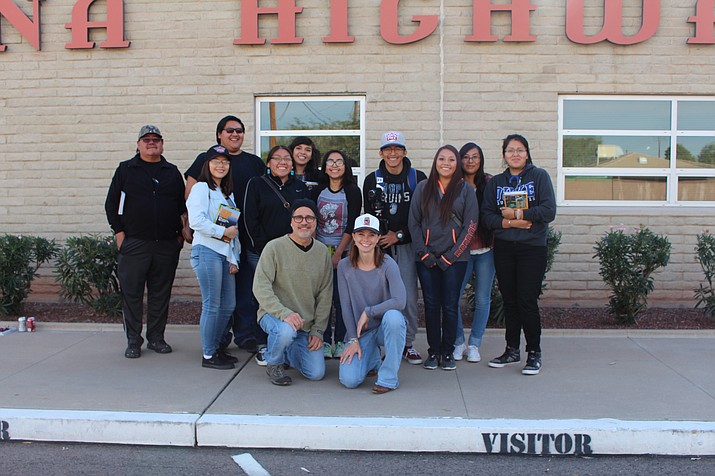 PHOENIX, ARIZ .— At Arizona Highways, the Hopi High students looked up at the editor’s wall where they could see all 60 pages laid out for the next edition.

Arizona Highways Editor Robert Stieve told the students the magazine has been going for 93 years so they have to be creative to come up with new ideas. He said Arizona Highways is known for its photography, but also has great writers.

Stieve said magazine staff conceptualize each monthly issue several months in advance. Arizona Highways also produces books, hiking guides and calendars. Each magazine is about 60 pages, but that’s more than other magazines because they have no advertising.

Arizona Highways focuses on history, culture, science and profiles in addition to the beautiful photos.

Arizona Highways is part of the Arizona Department of Transportation, but is self-sufficient when it comes to funding.

Stieve said a lot of the magazine photos are shot a year in advance.

Arizona Highways has subscriptions in all 50 states and 120 countries. Stieve said Arizona Highways photo editor Jeff Kida started at the magazine as an intern. For a recent issue, Kida had to narrow 7,000 photos down to 31 for an issue about Arizona’s canyons.

“Everybody here has a different job description. It’s very specific and they are really good at what they do,” he said.

“Arizona Highways was interesting,” Saufkie said. “It was nice to see how they made their magazine. It was also nice to see all the beautiful pictures that they had hanging and also the ones in the magazines. “

Ronald “Slippers” Lopez, a print journalism student at Hopi High, said it was nice of the Arizona Highways editors to show the students how the magazine is put together.

“It was good to see the layout of the magazine and how they make the cover,” he said. “The tour made me interested in photography.”

Lopez said the people he met on the trip encourage him to do more with journalism, especially photography. He is considering minoring in journalism in college.

Lopez said the trip showed him that journalism can be fun if you know what to do.

Tyesha Nevayaktewa, a sophomore print journalism student at Hopi High, said she liked how Arizona Highways had their layouts on the board.

“They had really cool pictures. They had nice sceneries,” she said,

The Arizona Highways staff donated books on camping and traveling to the Hopi High students.

The Hopi High media students also toured Spot 127, an afterschool media program in the valley where some may land internships when they attend college,

“I liked the idea of the whole school’s purpose,” she said.

“I got to do it at the school’s setup (studio), which was cool. I like the whole purpose of the school because it gives kids the opportunity to get into the journalism world,” she said.

Saufkie said Spot 127 was cool because the rooms were comfortable with bean bags.

“It is a great way for students to learn what they need to know and be comfortable while doing it,” she said.

Nevayaktewa said Spot 127 is a place she would like to chill.

“I learned the proper way to hold a camera while taking pictures,” she said.

ShiDaisy Nelson, a print journalism student at Hopi High, said Spot 127 was cool because of the video and radio equipment. While there, Nelson received tips on how to interview.

The Hopi High media students learned about basketball media at Phoenix Suns Journalism Day. They listened to announcers Tom Chambers and Tom Leander talk about their jobs before listening to sportswriter Paul Coro speak about his job.

Elisa “Mouth” Casarez, editor of the Hopi High Bruin Times, interviewed Coro. She said the trip motivates her to do more with journalism. Her advice to students who go on the trip is be prepared and do some work while there.

Then the students went through a trailer where they were able to see how the games are filmed. They also had a chance to shoot baskets on the Phoenix Suns court. Then they toured the Cronkite School of Journalism. After a dinner break, they watched the Suns bear the Atlanta Hawks by two points.

Saufkie said her favorite part of the tour was stopping at the Cronkite museum where she saw historic items and learned how technology has changed.

Lahaleon said touring ASU was her favorite part of the trip.

“I loved the campus and all the programs and hands-on equipment,” she said.

Lopez said the Phoenix Suns Journalism Day was fun because of seeing the Suns games, hanging out with friends, getting crazy, yelling fighting the crowd for t-shirts that were thrown out and singing at karaoke.

Nevayaktewa said the Suns game was the highlight of the trip.

“We were cheering loud, clapping for the Suns. I almost caught two t-shirts,” she said.

Nevayaktewa said the trip motivates her to be more involved in journalism.

“I will take it seriously and do more stories and editorials,” she said.