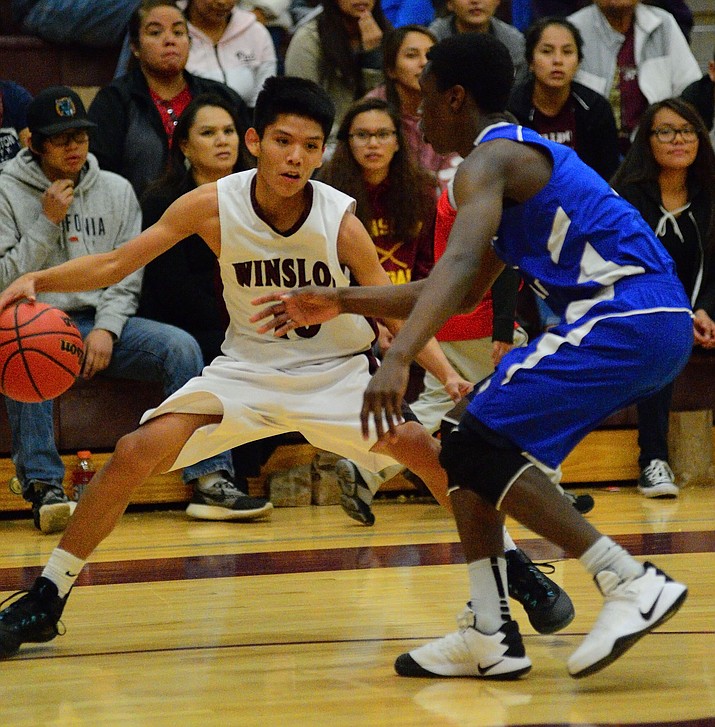 Winslow boys and girls basketball teams are on a roll. Above: a Winslow Bulldog dog on offense against Kingman Academy. Todd Roth/NHO

WINSLOW, Ariz. — The Winslow Bulldogs and Lady Bulldogs are both off to great starts in their 2016-17 season.

The Bulldogs opened their 2016-17 season with six straight wins, most of them in the Sedona Red Rock Tournament. The season opener was an 89-40 blowout of the Safford Bulldogs at Winslow Nov. 22.

In the first round of the Sedona Red Rock Tournament, Winslow defeated the Mingus Marauders 86-72, then slipped by the Sabino Sabercats 83-78. A 75-65 win over the Snowflake Lobos was followed by a 76-65 win over the Prescott Badgers.

Unfortunately, the scoresheets for the beginning games of the season were not available at press time. The Bulldogs hosted and defeated Kingman Academy 80-74 Dec. 6. They began play in the Pepsi Invitational after that. They were to play the Tuba City Warriors in Tuba City Dec. 13.

The Lady Bulldogs lost in the first round of the Gallup Invitational Tournament 51-40 to Cleveland, New Mexico, but came back to beat Grants, New Mexico 50-38 and Window Rock, Arizona 53-40 in their next two games. They had beaten the Safford Lady Bulldogs at Winslow on Nov. 22 to start the season.

Cleveland outscored Winslow 12-7 in the first quarter and 12-10 in the second to take a 24-17 half time lead. The margin was 32-29 after three quarters but Cleveland pulled away in the final period. Cleveland was led by Desiree Forster with 16 points. Kathleen Franklin and Velesta Gallinda each scored 10 points. Winslow was led by Danielle James with 13 points and Jenna Yazzie with 12 points.

Against Grants, Winslow led 9-6 after the first quarter and by single point 17-16 at the half. The Lady Bulldogs had a good third quarter and led 33-24 going into the final period. Danielle James led the Lady Bulldogs with 16 points. Kelli Mitchell was also in double figures with 10 points. Alissa Anzures led Grants with 11 points.

In the win over Window Rock, the Lady Bulldogs led 17-12 over the Lady Scouts after the first quarter and a commanding 35-16 at the half. The margin was 47-30 going into the final period. Jenna Yazzie led Winslow with 13 points. Danielle James and Justine Butterfield were also in double figures with 10 points each. Window Rock was led by Payton Murphy and Vanessa James with 14 points each. Haley Talliby was also in double figures with 11 points.

The results of the tournament left the Lady Bulldogs with a 3-1 record for the season. The Lady Bulldogs defeated the Mingus Lady Marauders 52-34 at home on Wednesday before going to the Pepsi Invitational Tournament at Flagstaff Dec. 8 where their first game was to be against Trevor Brown.