A maze of pipelines cross tribal homelands
With his map, Aaron Carapella hopes to raise awareness and educate people of upcoming pipeline projects 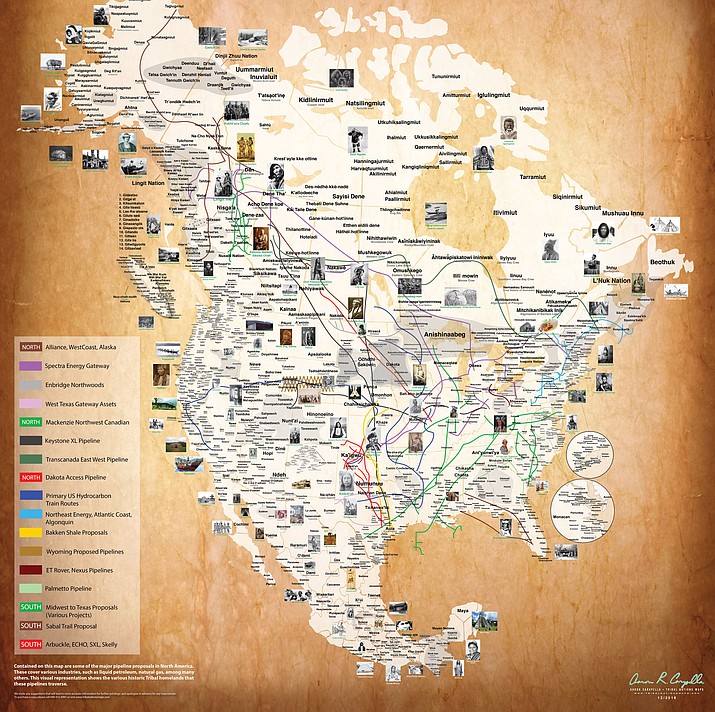 Mapmaker Aaron Carapella spent six months creating a map with proposed and in-progress pipelines zig-zagging across the United States. Free downloads of the map are available at www.tribalnationsmaps.com. Photo courtesy of Aaron Carapella

FLAGSTAFF, Ariz. — It took mapmaker Aaron Carapella six months to create a map showing pipelines that are in process but not yet completed, many of which border or are on tribal land.

Carapella said a big inspiration for making the map was Winona LaDuke, a vice-presidential candidate under Ralph Nadar in 1996 and 2000. She is a well-known Native American environmental activist Carapella met at a school in Massachusetts where they were both guest speakers. She is also the executive director of Honor the Earth, which has played a big role in the Dakota Access Pipeline protest.

In the course of two days, Carapella got to pick LaDuke’s brain. He found she was trying to get the mostly white students, who attend a very expensive preparatory school, to realize their fight against a pipeline in their neighborhood is the same fight Native people are fighting, but Native people have fewer resources and less clout.

“She told them, ‘Imagine us Indian people out on remote reservations and rural areas and even white farmers who are fighting these multi-conglomerate corporations’ pipelines,’” he said. “That really got me thinking. I already knew the pipelines were a problem, but hearing her talk about it was inspiring.”

The fight against the Dakota Access Pipeline is a symptom of something Carapella has always tried to show with his maps — that there are people who have been here for generations, on land that others think is empty. But Native people have always been in those places. (The Dakota Access Pipeline was rerouted from a more populous area around Bismark when residents complained to an area near the Standing Rock Sioux reservation, where people are now protesting.)

Carapella sees the protest at Standing Rock in North Dakota as one of the biggest gatherings of Native people since Custer and Crazy Horse. With a history of activism in the American Indian Movement, Carapella has been involved in some big land occupations that extended for months at a time, similar, he says, to Wounded Knee and what is going on now at Standing Rock.

“This kinda strikes at me because I wish I could be there,” he said. “If I didn’t have a 2-year-old son, I would be there every day camping. I have a lot of friends who have come and gone and who are there now. It’s just very personal to me, of course.”

With many pipelines in the process of becoming reality, Standing Rock stands out because of its worldwide attention and the many tribes who are supporting it. Carapella said one reason for that is the history the Standing Rock Sioux have in the country.

“The Standing Rock Sioux are the … same band of Sioux people that Sitting Bull comes from,” he said. “Just to the south of them in Pine Ridge, the Oglala people, that’s where Crazy Horse and Red Cloud come from… these famous and iconic Native leaders who were some of the last resistors to colonization.”

He adds the Navajo and Hopi to that list, who were some of the last to assimilate or give up to the U.S. Army.

“There’s a lot shorter of a memory span or I guess a longer memory span for these people,” he said. “There’s Diné people and Lakota people whose grandparents were born free. They might be in their 80s or 90s, but there are people who are alive today who still remember the stories that they were told as children, whose grandpas fought at Little Bighorn.”

He compares some of those tribes to ones who are more assimilated, like the ones where he is from in Oklahoma.

“Ninety-five percent of the Cherokee Nation are Baptists,” he said. “There are a lot of very American patriotic indigenous people here in Oklahoma who have almost forgotten what it means to be resistors. With some of these western tribes, it is very close to their heart.”

With his maps, Carapella has always tried to show the differences between tribes who remained on their homeland and the ones who were ripped off their land and forced onto the Trail of Tears.

“The Sioux people contest a lot of the land that was stolen around their reservation,” he said. “But their reservation is at least still centered in their homeland. So they identify with the places around the camp, they have names for all the ridges, valleys and rivers in their language. They have a cultural memory that some other tribes won’t.”

Even with tribes who are not active and who would not stage something like the Sioux Tribe has, tribes like the Choctaw or the Cherokee, have been sending supplies to support the people protesting.

“I think deep in the hearts of the leadership and the people, even among very assimilated tribes, they still understand that there is a sense of solidarity in being indigenous,” Carapella said.

With a new administration coming in he said indigenous people are gearing up for a fight that is never ending, which is something that his pipeline map shows. Even if the Standing Rock Sioux prevail in court and on the ground, there are many fights across the country that are coming.

“There are so many future pipeline projects that are in the works right now like all the ones on the map right now, and there are probably some missing off the map I did,” Carapell said. “Those are multi-billion dollar projects.”

With workers who have been laid off who have the potential to make a lot of money constructing the pipelines, the fight is a hard one and one that can get lost in an economic message that is appealing without looking at the bigger picture.

“You get the workers and the unions riled up and saying ‘Look at these wily Natives stopping us from our economic prosperity instead of looking at ‘our kids won’t be able to drink water,’” Carapella said. “A lot of these people’s immediate concerns are being taking advantage of for the purposes of defending these companies.”

And while Carapella realizes that some structures need to be in place for delivering energy to people in a society with 300 million people, he said the government needs to think before they try to put in pipelines right around reservation borders.

“They have to look at whether that land beyond the reservation border is contested,” Carapella said. “Whether or not that land was stolen by a treaty. Most of this land was stolen after a treaty breaking. I understand why the majority of the population might be unaware of that history, but the only thing the U.S. government has really respected when it comes to Native people is resistance.”

Hollywood and John Wayne movies have shown that, Carapella said.

“Who are the tribes that they talk about and respect, even as they are killing them?” Carpella asked. “It’s the Navajo with Kit Carson, it’s the Sioux and the Apache. Any tribe who stood up and resisted probably got the worst effects of genocide, but they also ultimately are revered by non-Indians.”

Smaller tribes who offered less resistance and were more peaceful are rarely shown on maps, though Carapella includes them on his. Carapella said that is because America started out as a pretty violent place and revering aggression, guns and violence is in our culture.

“I hate to be so cynical, I try to be optimistic, too” Carapella said. “But this issue up in Standing Rock, there really is no compromise. The company is saying, ‘Well, we almost have this pipeline completed and the Natives are saying, ‘We don’t care. We objected to it before you even started laying the pipe.’”

Unlike his other maps, Carapella is not sure where he is going with this map. He said there is a possibility of updating it every six months or so, to take off pipelines that have been completed and adding ones that are planned or are in progress.

“It is an in the moment kind of deal, it doesn’t show anything really permanent,” he said. “It is pertinent for the time. I’m thinking of taking this map and transposing the U.S. portion of the map onto my U.S. reservation map to show people where these pipelines are in in conjunction to Indian reservations.”

He also said it was impossible to include all the pipelines across the country and that he knows he may have missed some.

“It was kinda difficult to do this map because there are literally like hundreds of thousands miles of pipelines,” he said. “These are ones that are in the works or partway completed. I was trying to paint a picture for people of the up and coming fights.”

Carapella acknowledges that some pipelines can be good and the alternative is to transport by train or by truck, which have their own dangers, but he wants people to be aware of the dangers, most likely a leak at some point.

“Just while Standing Rock has been going on, there’s been several major leak disasters around the country,” he said. “I think there was one in Texas, Louisiana and Georgia with very similar infrastructure. How ridiculous is it to run a pipeline under the major water system in the U.S.? Even if they claim they could clean it or something, just imagine the potential for catastrophe.”

He also wants people to understand it is not just the Sioux who are affected by the pipelines. The Sioux are contesting two broken treaties, the 1851 treaty and the 1868 Ft. Laramie treaty. But Carapella said there were 371 treaties that were broken by the government.

“What tribes do those have to do with?” Carapella said. “That’s what this map shows. It shows all the other tribes whose traditional homelands are being traversed through by these projects.”

Free PDF’s of the maps are available for download at http://www.tribalnationsmaps.com/pipeline-map.html and anyone is free to use it in presentations or to have their own copy.

More information about Carapella and his other maps is available at http://www.tribalnationsmaps.com/.