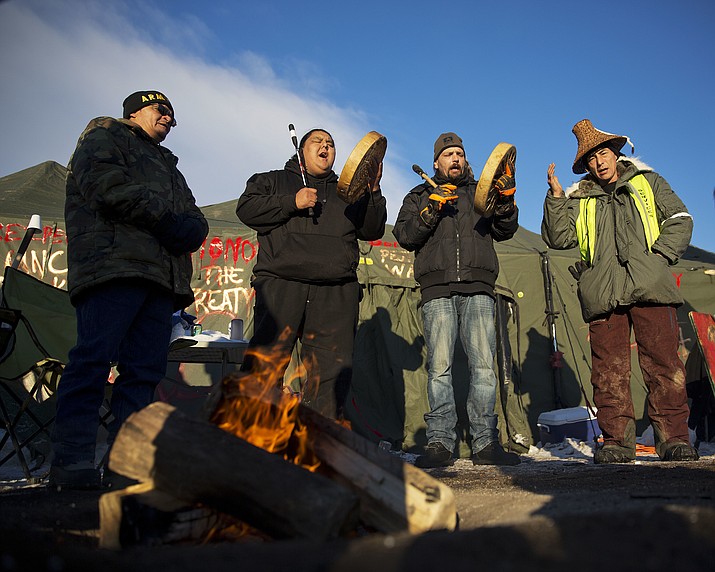 From left: Eugene Sanchez, Jason Umtuch, Martan Mendenhall, and Hugh Ahnatock, all of Portland, Ore., drum and sing at the Oceti Sakowin camp where people have gathered to protest the Dakota Access oil pipeline (DAPL) in Cannon Ball, N.D. Dec. 4. The U.S. Army Corps of Engineers said Sunday it won't grant an easement for the DAPL in southern North Dakota, handing a victory to the Standing Rock Sioux tribe and its supporters, who argued the project would threaten the tribe's water source and cultural sites. AP Photo/David Goldman

STANDING ROCK, N.D. — Federal officials with the Department of Army announced Dec. 4 they would not approve permits for construction of the Dakota Access Pipeline.

The denial halts construction of the $3.8 billion dollar project that has been partially stalled at the easement of the contested Missouri River, the primary water source for the Standing Rock Sioux Tribe.

The decision is a significant victory for the tribal nation and thousands of water protectors camped near the construction site of the pipeline project who have until tomorrow, Monday Dec. 5 to evacuate the sprawling Oceti Sakowin Camp.

In a statement released by the Army’s Assistant Secretary for Civil Works, Jo-Ellen Darcy said she based her decision on a need to explore alternate routes for the 1,172 mile-long pipeline.

“Although we have had continuing discussion and exchanges of new information with the Standing Rock Sioux and Dakota Access, it’s clear that there’s more work to do,” Darcy said.

The federal agency is recommending an Environmental Impact Statement (EIS) be conducted with full public input and analysis to explore a possible reroute of the pipeline. The Standing Rock Sioux Tribe argued that the existing path of the energy project threatened the Missouri River, the tribe’s water supply. Plans called for burying the pipe 90–110 feet below the Missouri River. The administration of President Barack Obama had blocked construction of easements on both sides of the river in early September. In November, Obama told Now This News that the Army Corps of Engineers was considering alternate routes for the pipeline project.

Energy Transfer Partners, operator of the Dakota Access pipeline, has publicly rejected ideas of a reroute.

While Sunday’s decision is seen as a major victory for the Standing Rock Sioux Tribe and its thousands of supporters, tribal leaders and organizers behind the movement are celebrating with caution.

“We hope that Kelcy Warren, Governor [Jack] Dalrymple and the incoming Trump administration respect this decision and understand the complex process that led us to this point,” said Standing Rock Sioux Tribal Chairman Dave Archambault II in a prepared statement, referring to Energy Transfer Partners, CEO and the governor of North Dakota.

In a response statement Energy Transfers and Sunoco Logistics Partners raised doubts about that hope by saying the Army Corps of Engineers refusal to issue an easement to the Dakota Access Pipeline is a “purely political action.”

“As stated all along, ETP and SXL are fully committed to ensuring that this vital project is brought to completion and fully expect construction of the pipeline without any additional rerouting in and around Lake Oahe,” the statement said. “Nothing this administration has done today changes that in any way.”

Despite that, Native Americans who have stood against the pipeline consider it a victory even while they wait to see what will happen next.

“Our network is singing the victory song with the Standing Rock Sioux,” said Tom Goldtooth, director of the Indigenous Environmental Network.  “However, we are cautiously hopeful that this is a total win.”

Sacred Stone Camp also issued a warning that the Trump administration could easily approve the project early next year.

“The Obama administration has never guaranteed the water protectors or the Standing Rock Sioux Tribe that they would use force to stop Dakota Access from drilling under the river without a permit, if necessary,” Sacred Stone Camp’s statement said. “The Army Corps has not yet agrees to pursue a full EIS for the entire length of the pipeline.”

But there was gratitude and appreciation for Obama, who has mostly remained silent on the issue in recent weeks.

“The Standing Rock Sioux Tribe and all of Indian Country will be forever grateful to the Obama Administration for this historic decision,” Archambault said. “In a system that has continuously been stacked against us from every angle, it took tremendous courage to take a new approach to our nation-to-nation relationship.”