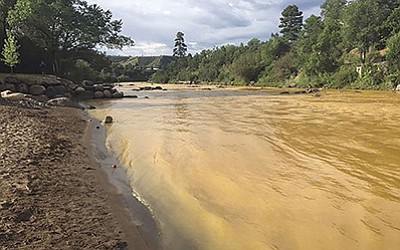 The Animas River runs yellow with toxin-tainted wastewater in August after a spill from the abandoned Gold King Mine near Silverton, Colorado. Photo/Colorado Parks and Wildlife Department via Reuters

SHIPROCK, N.M. - The Navajo Nation announced Aug. 17 its intention to sue the Environmental Protection Agency for its misconduct and role in causing the Gold King Mine spill Aug. 5, 2015, which impacted Navajo farmers.

The spill caused the river to turn yellow from oxidation of dissolved iron in the 3 million gallons of mine waste water that was spilled.

The lawsuit was filed by the Nation's counsel at Hueston Hennigan, LLP and seeks to hold the EPA, its contractors and mining companies accountable for the spill and to obtain financial compensation to the Nation for the harm the spill caused.

Begaye said that for centuries Native Americans have been victims of environmental devestation at the hands of the federal government and private industry He said the Nation will not allow this neglect, recklessness or worse to go unanswered.

"To this day, no one has been held accountable," he said. "No one has anted up for causing this financial, cultural and spiritual catastrophe to the Navajo people."

He said that the Nation knows it was not just the responsibility of the EPA.

"We know that contractors working the [mine] were negligent and reckless," Begaye said. "The owners of mines in this area who caused the buildup of toxic wastewater and left the mess for others to deal with must also be held responsible."

In addition to the EPA, the lawsuit names several defendants that include Environmental Restoration and the Gold King Mines Corp., Sunnyside Gold Corp. and Kinross.

Nez said the reason for bringing the lawsuit is to show the Nation is fighting on behalf of all Native American tribes by holding the U.S. government and others accountable for the environmental catastrophe, which is one of many that have been committed against tribes for centuries.

Senators and Representatives from both sides of the aisle have voiced their support of the lawsuit since it was announced on Aug. 17.

Sen. John McCain (R-Ariz.) commended Begaye and Bates for their relentless advocacy on behalf of their tribal members.

"The Navajo Nation has every reason to sue the EPA for its role in devastating hundreds of Navajo farms following the Gold King Mine disaster," he said.

Sen. Martin Heinrich (D-N.M.) issued a statement expressing his concerns about delays in compensation to the Navajo Nation people for costs and damages caused by the Gold King Mine spill.

"It's been over a year and families are still feeling the economic impacts and health uncertainties of the Gold King Mine spill," he said. "The pace of reimbursement to those impacted by this terrible incident is unacceptable. The EPA must fully compensate victims of the spill for their losses and provide a better process for filing claims."

Rep. Ann Kirkpatrick (D-Ariz.) said she stands firmly with the Nation in its lawsuit against the EPA.

"The Gold King Mine spill was catastrophic of the Navajo people," she said. "Not only was it an environmental and economic disaster, it was a failure by the EPA on several fronts. First, the agency failed to respond swiftly and transparently. It failed to immediately engage the tribal government. And, it failed to fully address the disaster's short and long term burdens on the tribe."

U.S. Senator Tom Udall (D-NM) issued a statement supporting the Navajo Nation's decision to pursue justice for ongoing damages saying the Navajo people have been on the receiving end of devastating environmental disasters brought on by the federal government and private industry for far too long.

"The spill was an accident, but the EPA made several serious mistakes, and the Navajo Nation has every right to pursue its claims for damages in court," Udall said. "This was not a natural disaster, and the communities that were harmed by the toxic spill deserve compensation."

House Natural Resources Committee Ranking Member, Raul Grijalva (D-Ariz.) urged EPA officials to quickly resolve the Nation's claims as the best and fastest way to protect the interests of the Navajo Nation and the agency itself.

"Dragging this process out for several years will not help the EPA or the Navajo Nation," Grijalva said. "Any crop not being planted and any water source not being restored to full potential is a missed opportunity. The longer this takes, the more animosity will build, and that's an outcome we should all work together to avoid."

Begaye said that the initial trust the Nation had that the EPA were protectors of the environment has been significantly eroded during the past year and he said that the treatment of the Nation by those who committed the acts has reduced that trust too.

"What have we asked for?" Begaye asked. "Nothing more than full, fast and fair recovery for the Navajo Nation and for the Navajo people.  Yet each of our reasonable requests for relief has been delayed or denied. No more. We demand compensation for our people, and we demand it now. The defendants should do the right thing and fix the mess they created."

In a meeting held a week earlier, Speaker Bates called on the federal government to expedite the compensation process for Navajo farmers and livestock owners impacted by the Gold King Mine spill, during a roundtable discussion hosted by U.S. Rep. Ben Ray Lujan (D - N.M.) at the Sycamore Community Center in Farmington, New Mexico.

Lujan organized the roundtable discussion to allow federal, state, county and tribal officials the opportunity to discuss the progress of recovery efforts and to address the ongoing needs of community members impacted by the spill that occurred one year ago.

Bates urged all governmental entities in attendance to be proactive in determining how their respective authorities and resources can be used to help those impacted by the spill on a long-term basis.

"We shouldn't expect this to go away," Bates said. "We have to understand that there will be long-term impacts and we all have our own resources so we need to determine how these multiple jurisdictions will work together in the long-term."

Bates also pointed out that as a farmer and livestock owner who was impacted by the spill, he fully understands the financial burden that many Navajo people continue to deal with because of the loss of crops, alfalfa and other products.

EPA acting regional administrator for Region 9 Alexis Strauss, also took part in the discussion via video teleconference. Strauss noted that the federal EPA has provided over $3 million to states and tribes since the spill occurred and that the EPA would continue efforts to provide long-term monitoring of water quality in the Animas River and the San Juan River. She also said the EPA would likely hold a workshop in November in Salt Lake City for officials from impacted areas.

Bates also urged the officials in attendance to determine how the entities would work together in the event of another emergency in the area.

"We have to understand that this type of event could occur again given the number of mines upstream," Bates said.

At the conclusion of the roundtable discussion, Lujan said his office would formulate a letter to EPA administrator Gina McCarthy outlining the questions and concerns brought forth during the discussion.