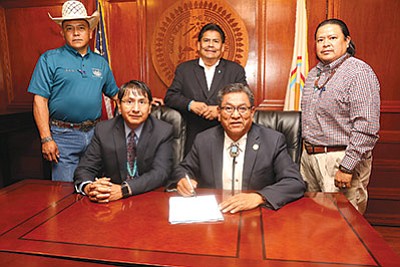 During the signing, Begaye acknowledged the efforts of the 23rd Navajo Nation Council and the leadership of Council Delegate

The Navajo Nation Land Acquisition Act implements amendments to the land acquisition process that will facilitate faster and easier acquisition of industrial and commercial properties and also the acquisition and disposal of real property.

"The process needs to be more immediate because the previous process was too time consuming and had caused the Nation to lose out on property," Begaye said. "The legislation positions the Navajo Nation to be on the same level as companies that compete against us in purchasing prime property. It positions us to invest in property in big cities."

Begaye noted the involvement of the Office of the President and Vice President Legal Counsel Karis Begaye as being critical in having the act approved and enacted.

Nez said amendments to the act will also make land disposal quicker for the Navajo Nation.

The vice president said that outside entities have expressed interest in buying Navajo properties but the Nation hasn't been able to sell because of its inability to hold property leases.

"It has been difficult to sell our properties because we didn't have authority to do so," Nez said. "Amendments to this act have addressed this issue so that the Nation can look at selling property. The Nation needs to be able to sell unusable or undevelopable properties when the interest is there."

NLD Director Mike Halona agreed that the new legislation quickens the lengthy process of acquiring and disposing of land.

"The legislation is a proactive approach that is based on the needs of the Nation," Halona said.

Delegate Slim said the Nation needs to use the Navajo Land Acquisition Act to provide economic growth for future generations.

"We are ready to make economic development possible for our young," he said.

By enacting the Navajo Land Acquisition Act, Delegate Shepherd said that OPVP and the Navajo Nation Council are working together on behalf of the Navajo people's best interests.

He said the Navajo Nation has long struggled with acquiring land and that among many other things, the Navajo Land Acquisition Act addresses the land withdrawal process and homesite leasing legislation.

As he spoke before the signing, Shepherd thanked OPVP.

"It's important that we got to this point. We need to foster this relationship," he said. "The support from all branches needs to be there and we're glad to be a part of it."