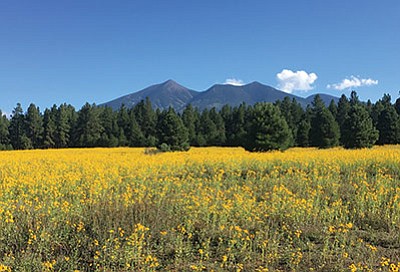 The San Francisco Peaks are sacred to many Native American tribes in the area. A lawsuit brought by the Hopi Tribe over reclaimed water on the Peaks was dismissed Aug. 13. Katherine Locke/NHO

FLAGSTAFF, Ariz. - The Hopi Tribe's lawsuit last claim against the city of Flagstaff over the use of reclaimed water at the Arizona Snowbowl was dismissed Aug. 13 by Coconino County Superior Court Judge Mark Moran.

"Given all of the circumstances, the court concludes that the use of reclaimed water by Snowbowl is not unreasonable or illegal under the circumstances, nor is there a likelihood that it will result in irreparable harm to the plaintiff," Moran said in his ruling.

He also said the tribe failed to show that snowmaking impacted the tribe's ability to conduct its ceremonies on the Peaks.

In 2011, the city prevailed in court on the three charges, which the Hopi Tribe appealed. In 2012, Snowbowl completed their investment in the pipeline and pumping stations and the city started delivering reclaimed water for snowmaking.

In 2014 the Arizona Court of Appeals reinstated the public nuisance charge and the city filed a third party complaint against Snowbowl to recover all attorney's fees, litigation costs and damages.

The ruling Aug. 13 was in response to a February motion by Snowbowl to the court to dismiss the remaining claim.

The decision comes after a lengthy attempt by the Hopi Tribe and the city of Flagstaff to reach an agreement on an earthen filtration system.

The proposed settlement would have ended all litigation between the tribe and the city and called for an earthen filtration system to be constructed at no cost to the Hopi Tribe with requirements to meet specific water quality standards. Other tribes concerned about reclaimed water and snowmaking were not part of the settlement.

While the courts have allowed reclaimed water for snowmaking on peaks -Snowbowl began using it in 2012 - in 2014, the Arizona Court of Appeals reinstated the public nuisance charge through environmental contamination that the Hopi Tribe brought against the city and the city subsequently filed a third party complaint against Snowbowl.

That proposed agreement did not come to fruition after the Flagstaff City Council failed to act on it, instead postponing a decision on the matter indefinitely.

The Hopi Tribal Council had approved the agreement unanimously Feb. 24. The city again delayed a decision on that proposed settlement May 17.

After that delay, the tribe said it would return to court to protect the Peaks from reclaimed wastewater

At the time, Hopi Tribe Vice Chairman Alfred Lomahquahu said Hopi officials were stunned by the Flagstaff City Council's complete inability to make a decision regarding a settlement that both the city attorney and city water and utilities staff had recommended. Lomahquahu said he was unimpressed with the mayor and city council's lack of leadership on the issue.

Brad Hill, Flagstaff utilities director, previously said the filtration system would cost $1.6 million to build. Maintenance, operation and replacement of the system would cost around $181,000 per year. The filtration system was to be built at Thorpe Park to improve the quality of reclaimed wastewater being sold by the city to Snowbowl for snowmaking.

The peaks are sacred to Native American tribes and according to the press release is "one of the most sacred places to the Hopi Tribe."

The Hopi Tribal Council is expected to hold a council meeting, open to the public, Aug. 22 to discuss this issue. No further comments were made by the tribe at press time.