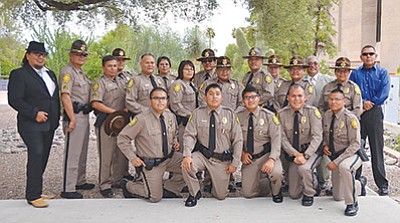 "It was an honor to be among the new police officers of the Nation today," said LOC vice chair Council Delegate Raymond Smith, Jr. (Houck, Klagetoh, Nahata Dziil, Tsé Si áni, Wide Ruins). "The Law and Order Committee congratulates them on their hard work to become a protector of our Nation. I honor their courage and sacrifice to serve and protect the Nation. The Nation has gained six new intelligent, young, and determined officers."

The six recruits are:

The training curriculum consists of intensive training on the use of force, vehicle operation, firearms use, defensive tactics, pursuit operations, first aid, stress management, classroom comprehensive studies, and physical conditioning. Each of the six recruits was required to pass a physical aptitude test that included a timed 500-yard run, a timed 99-yard obstacle course, a 165-pound dummy bag, a six-foot chain link fence climb, and a six-foot wall climb.

Navajo Nation police officer Jershon Begay of Pinedale, New Mexico, stated that the training was intensive, adding that he is very proud to return to the Navajo Nation to serve his people and his family.

Law and Order Committee members have met on several occasions with officials from the Navajo Nation Division of Public Safety and the Bureau of Indian Affairs to advocate for several public safety initiatives that include higher pay for Navajo officers, a better retirement package and establishing a police academy on the Navajo Nation.

"Our officers remain a top priority for the Law and Order Committee and we will continue to support them and to lobby on their behalf at all levels of government," said LOC chair Council Delegate Edmund Yazzie (Churchrock, Iyanbito, Mariano Lake, Pinedale, Smith Lake, Thoreau).

The six Navajo police officers will return to the Navajo Nation and start their duties within their designated police district next week.