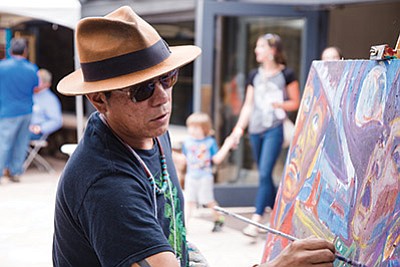 Bahe Whitethorn, Jr. works on a painting in the courtyard of the Museum of Northern Arizona during the 67th annual Navajo Festival of Arts & Culture. He earned an Honorable Mention for his painting “Warriors Gaze.” Photo/Ryan Williams Photography

FLAGSTAFF, Ariz. - The Museum of Northern Arizona (MNA) celebrated Navajo art and culture with more than 80 artists on hand to show their skill in painting, weaving, silver work and music Aug. 6-7 at the museum.

Jason Parrish, a painter from New Mexico, said this was his first time attending the Navajo Arts and Festival show. Last year, he participated in the consignment area and he won the Director's Award for a painting, which he sold.

"I only brought one painting [last year], so I thought this would be a fantastic market for my traditional style paintings," he said. "So far, so good."

Parrish said his style of painting brings back memories for a lot of the collectors who come to the show because it is a style they have not seen for a long time, especially in shows filled with contemporary paintings.

"They say it is nice to see the old style," Parrish said.

Old-style artwork is two-dimensional artwork, or flat work. It is linear and more basic in terms of line, form and color. The style was taught at the Santa Fe Boarding School in the 1930s and was pioneered by Dorothy Dunn. She encouraged students to draw what they knew instead of a more commercial, European style. One of her most successful students was the late Pablita Valarde, who won many awards world-wide painting in this style.

Contemporary abstract artist Don Whitesinger has come to the show at MNA many times. He said the museum setting is one of the main draws for him as an artist to participate because the general public has a chance to see and buy the artwork. He said prestige comes with a museum show that people cannot find in a more commercial setting.

Whitesinger teaches art at Diné College on the Navajo Reservation. He said in an artist statement that art is usually a reflection of one's culture or way of life, whether it is abstract or contemporary thinking.

"I think when producing art for the sake of art, one has a feeling of self-worth thus enhancing our self-esteem, this is the ultimate reason for our existence as five-finger people," he said.

Well-known artist Baje Whitethorn, Sr., from Flagstaff, and his son, Bahe Whitethorn Jr., were on hand with paintings. Baje said the show is a yearly part of his life. He considers the show at MNA home.

"It has to do with community," he said. "It is put on by the museum, the city and the county and looking at their own history in understanding Native culture and the arts itself."

He said the membership of the museum and the idea that artists are sponsored by some of those people is important. For the artist, those connections are invaluable, he said, and can span decades.

"A relationship is made," Baje said. "For the artist, if they begin, it is a good place to begin."

Baje said he lives in Flagstaff and grew up some on the reservation. The museum has given Baje the opportunity to show his work while also honoring his ideas and interest in the arts. He said the education department helped him understand what his love in the arts was.

"They helped me develop and they give you that acknowledgement," he said. "Once you gain that, you have the tools to understand what you need to be doing, which is communicating, which is building relationships, which is supporting the arts for the local artists and those in the surrounding areas on the reservation."

Baje said the museum is a big supporter of the artwork that is produced and the artist and the museum collaborate to give something to the community and then also help create the event.

"There are other places mentioned, but this is home," he said.