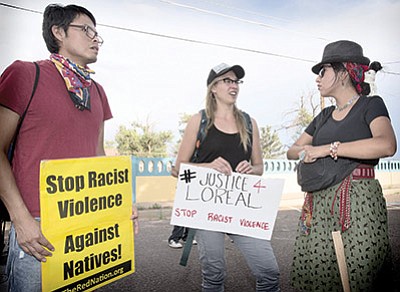 WINDOW ROCK - The 23rd Navajo Nation Council applauded a July 29 announcement that the U.S. Department of Justice will review the local investigation into the shooting death March 27 of 27-year-old Loreal Tsingine, a member of the Navajo Nation.

"The Navajo Nation Council is elated that the United States Department of Justice has made the decision to review the investigation into the shooting death of Loreal Tsingine by Officer [Austin] Shipley," said Navajo Nation Council Speaker LoRenzo Bates. "While Maricopa County may allow Officer Shipley to escape criminal prosecution, we are hopeful that a federal investigation will bring justice for the Tsinigine family."

Bates said the council wholeheartedly supports the decision of the Department of Justice and pointed out that the Office of the Speaker, Office of the President and Vice President, and the Navajo Nation Human Rights Commission have all sought the intervention by the department.

On May 26, members of the Navajo Nation Council unanimously approved a resolution sponsored by Council Delegate Jonathan Hale, calling for U.S. Attorney General Loretta Lynch to investigate the Winslow Police Department in response to the shooting death of Tsinigine, who was originally from the small community of Teesto.

Council Delegate Lee Jack, Sr., who represents the community of Teesto, said community members are pleased with the announcement and called for a fair and timely investigation.

"The community and loved ones have had a very difficult time coping with the loss of Loreal and this announcement brings some hope and relief," Jack said "We want justice for the family, the community and the Navajo people."