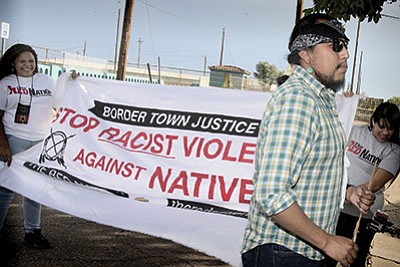 PHOENIX (AP) - The U.S. Justice Department announced this week it will investigate the fatal shooting of a Navajo woman by an Arizona police officer.

Tribal officials and activists have been urging federal officials to look into the treatment of American Indians in towns that border the Navajo Nation.

The outcry comes amid a wave of demonstrations and racial tensions throughout the U.S. over fatal police shootings of black men as well as deadly attacks on law enforcement officers.

Andrew Curley, an activist with The Red Nation who has organized several protests over the Winslow shooting, called the federal investigation "welcoming news."

Maricopa County prosecutors announced last week that Officer Austin Shipley would not be charged. According to Maricopa County Attorney Bill Montgomery, his office found no evidence of criminal conduct.

Shipley was responding to a shoplifting at a convenience store when he shot 27-year-old Tsingine on a nearby sidewalk.

The video from his body camera showed that the encounter with Tsingine lasted fewer than 30 seconds.

Shipley is seen on the video trying to restrain Tsingine, and she falls to the ground.

Tsingine gets up, and the video shows her walking quickly back toward Shipley with the pair of scissors in her left hand, pointed down.

She apparently yells at Shipley as he raises his gun and opens fire.

It's unclear from the video what Tsingine and Shipley said to each other during the confrontation because the video of the events just before the shooting and the shooting itself had no audio, city attorney Ellen Van Riper said.

In a summary of the encounter, the Arizona Department of Public Safety said its investigation concluded that Tsingine refused commands from Shipley for her to stop resisting, get on the ground and drop the scissors.

Witnesses confirmed that Shipley issued the commands, the department said. The full investigative report is expected to be released this week by Winslow officials.

Documents previously released by Winslow officials show that two officers who trained Shipley had serious concerns about his work and that one of them recommended he should not serve the city as an officer.

Tsingine had a lengthy arrest record, including an incident last year when she allegedly tried to grab an officer's gun as he tried to arrest her.

Her relatives have filed a $10.5 million notice of claim against the city, saying Shipley violated Tsingine's civil rights and that Winslow was negligent in "hiring, training, retaining, controlling and supervising" Shipley.

The wrongful-death claim filed this month is a precursor to a lawsuit and seeks $2 million for Tsingine's husband and $8.5 million for her 8-year-old daughter.

Shipley is on paid administrative leave while the Mesa Police Department conducts an internal affairs investigation.