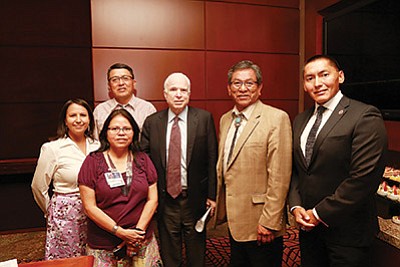 Begaye and McCain touched on Sen. Russell Pearce's Ft. Wingate bill, the Environmental Protection Agency's (EPA) role in compensation and remediation regarding the Gold King Mine spill and establishing an oncology treatment center on the Navajo Nation.

Begaye asked for McCain's support in removing 'right of way' language that was inserted into the Ft. Wingate bill, which would waive the right of way fees the Nation could charge municipalities and power companies to access tribal land.

"We are moving forward on this in agreement with council," Begaye said. "Having met with Senator [Tom] Udall last week, he agreed with us. We'd like that language removed."

Begaye told McCain that area farmers have yet to be compensated for their losses after the Gold King Mine spill. The president pushed for the EPA to provide compensation while also providing funding and resources for remediation of the river.

"If the Gold King Mine spill would have taken place in Connecticut, the response would have been totally different," McCain said. "I don't think the response was adequate for this disaster."

McCain also addressed the Office of Navajo Hopi Indian Relocation (OHNIR), stating that he would like to "do away with the commission."

"We should never forget that federal government created the [former Bennett Freeze area] FBFA and interfered in a land dispute between two tribal nations," McCain said. "This has left a bad impression on both nations for the past forty years."

Wenona Benally, director of Navajo Hopi Land Commission Office, said there are 200 cases on the docket that have yet to be heard regarding the administrative appeals that are pending before the relocation office. These appeals were filed by Hopi Partitioned Land residents who were denied relocation benefits.

"There has to be an end sometime," McCain said. "At some point, it has to stop."

Begaye said too much money has gone toward legal issues that should have gone toward more beneficial uses like funding housing projects.

Begaye, along with Phelps and CEO of Tuba City Health Care Corporation Lynette Bonar, advocated for an Oncology Treatment Center to be established on the Navajo Nation.

"We would like to be the leaders in cancer treatment on the Navajo Nation," Begaye said. "Cancer rates continue to rise and this facility is highly needed."

According to a 2004 cancer study, Navajos are diagnosed later in stages and rarely receive radiation treatment. Also, affordability is a large hindrance to treatment as is transportation to facilities.

"It's not just the older people who worked at the mines, it's the younger people as well," Begaye said. "The impacts of cancer from exposure over time, whether to water or soil or gamma rays from uranium mines, affect the Nation and our people."

McCain asked Begaye for letters addressing each of these issues. McCain said that he would support the Nation's positions.