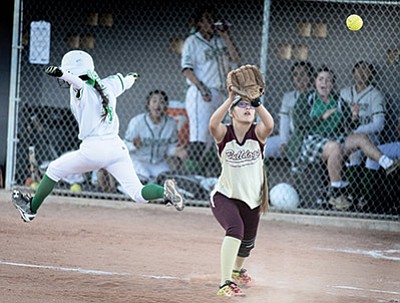 A St. Mary’s baserunner beats the ball to first base April 12 during the Lady Bulldogs’ 4-2 win in Winslow. Todd Roth/NHO

The wins gave the Lady Bulldogs a 19-10 record going into the final two games of the regular season. They were to meet the Marcos de Niza Lady Padres at Tempe April 23 and meet the Notre Dame Prep Lady Saints at Scottsdale April 25.

Sherreise Beaty went the distance in the 22-8 win over Mingus in the game shortened to five innings on the 10 run rule.

Beaty allowed eight runs, six of which were earned, on nine hits. Winslow had 16 hits led by Beaty and Hailee Branson who were three for four and Alyssa Smith who was three for five.

In the 10-5 win over Deer Valley, Justine Butterfield got the win allowing five runs, only four of which were earned, on nine hits in seven innings of work.

Smith and Wilcox were both four for four at the plate and Alicia O'Haco was two for two. Wilcox had a double. Gonzalez was three for five with a home run and a double. Butterfield was two for four with a double. Alona Padilla was one for three.

The Lady Bulldogs expect to be a playoff team.