Begaye: EPA not taking accountability for Gold King Mine spill 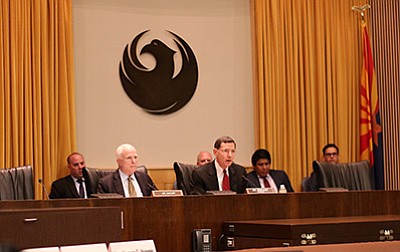 PHOENIX - Navajo Nation President Russell Begaye testified that Navajo farmers are still suffering and the Nation is still waiting on the Environmental Protection Agency to reimburse farmers at an April 22 hearing in Phoenix on the Gold King Mine spill.

Begaye said the EPA has not fully compensated the Navajo Nation for the harms suffered as a result of the spill, designated the Upper Animas Mining District as a Superfund site, implemented a comprehensive plan ensuring against future contamination of Navajo land or waters, provided the Nation with tools to address the existing harms or to mitigate future harms.

Begaye maintained that the EPA should not make empty promises but instead act upon what they say they're doing.

"It's like the thunder without the rain," Begaye said.

The Navajo Nation has requested over two million dollars in expenses to be reimbursed. The EPA offered $157,000, which totals less than 8 percent of expenses incurred, according to the president's office. The amount was offered as a grant and not recognized as reimbursement.

Begaye's written statement listed eight requests: a fair and independent assessment of the role the EPA played in events leading up to the Gold King Mine Spill, resources to conduct the Nation's own monitoring, testing and assessment of water, soil and crops, funds dedicated to emergency preparedness for future environmental disasters, the EPA's full support of listing the Upper Animas Mining District on the National Priorities List and resources to stabilize farming along the San Juan River.

During the hearing Sen. John McCain said the Senate Committee on Indian Affairs (SCOIA) would continue holding hearings until all questions are answered and compensation was awarded to the Nation.

"An economic analyst told the SCOIA that the Navajo Nation lost $982,000 in agriculture production during the first two weeks of the spill," McCain said, including that costs from the disaster could reach upward of $335 million dollars.

McCain also said that because of the EPA's lack of action and forthright involvement, a criminal investigation by the U.S. Department of Justice is merited and should occur.

Begaye thanked both McCain and Sen. John Barrasso III for SCOIA's hearing and the suggestion of a USDOJ criminal investigation.

"Navajo Farmers are still waiting for compensation," Begaye said. "They have not received a penny. EPA made promises but the farmers have yet to be compensated."