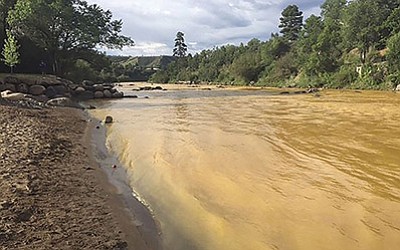 The Animas River runs yellow with toxin-tainted wastewater in August after a spill from the abandoned Gold King Mine. A Senate panel has set an April 22 hearing in Phoenix on the issue. Photo/Colorado Parks and Wildlife Department via Reuters

WASHINGTON - A Senate committee issued a subpoena April 6 demanding that Environmental Protection Agency Administrator Gina McCarthy or an assistant administrator appear at an April 22 hearing in Phoenix on the Gold King Mine spill.

Both the agency and members of the Senate Committee on Indian Affairs called the subpoena an "extraordinary" step in the committee's investigation of the spill, which dumped 3 million gallons of toxins - including zinc, lead, iron and arsenic - into the Animas River, which is in the Colorado River watershed.

"When there's a disaster caused by another agency of government and then we get this kind of response that we're forced to subpoena, then there's something really out of whack here," said Sen. John McCain, R-Arizona, during the hearing. "Honestly, sometimes after all these years the arrogance of bureaucracy ... continues to surprise me."

The EPA did not comment on the subpoena, which the committee said would be issued later after the chairman and vice chairman - Sen. John Barrasso, R-Wyoming, and Sen. Jon Tester, D-Montana - agreed to issue it.

But in an EPA letter to the committee April 5, the agency said it was deeply concerned by the decision to subpoena, calling it an extraordinary step.

That letter said the committee had originally requested the appearance in Phoenix of Assistant Administrator Mathy Stanislaus, who is scheduled to testify before another committee in Washington the day before the field hearing. But the letter said Stanislaus could testify despite logistical challenges.

The letter noted that the EPA had offered Regional Administrator Jared Blumenfeld and that agency officials have already provided congressional testimony on 41 separate occasions, including McCarthy's testimony to the Indian Affairs Committee in September on the spill.

The field hearing - "Examining EPA's Unacceptable Response to Indian Tribes" - is expected to focus heavily on the impact of the Gold King spill on the Navajo and other tribes. The abandoned mine in Silverton, Colorado, is upstream from the Navajo Nation and led to a state of emergency there, as well as in the states of Colorado and New Mexico.

Navajo Nation President Russell Begaye welcomed the subpoena of McCarthy, who promised at the time of the spill to take full responsibility.

"I think this has been sugarcoated all of the way through," Begaye said in telephone interview before the committee hearing April 6. "So we want an administrator to be there to answer the questions."

Begaye said the toxins from the spill spread beyond the river, soaking into the riverbed and destroying crops, which he said will be affected until 2018. He said the EPA has been fighting the Navajo every step of the way and that the tribe is increasingly leery that farmers won't be compensated.

Begaye said the EPA has an agreement to reimburse the Navajo Nation for $157,000 in cleanup costs from the spill. The EPA said that money is in addition to the $1.1 million the agency spent following the spill.

"To us, the amount that they put forth (in the cooperative agreement) is just a drop in the bucket for what they owe us for what they did," Begaye said.