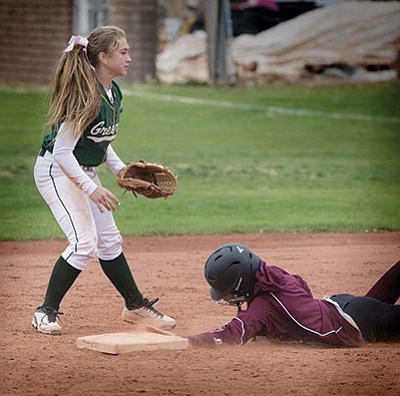 The results left Winslow's record at 17-9 and dropped Paradise Valley's to 1-11 and improved Greenway's to 15-7.

In the victory over Paradise Valley, Justine Butterfield got the win allowing just four runs, only three of which were earned, on three hits and a walk in five innings. The game was shortened because of the 10-run rule.

In the loss to Greenway, Beaty took the loss giving up eight runs, only seven of which were earned on five hits and a walk in four and a third innings of work. Alyssa Barton worked two and two thirds of an inning in relief and gave up two runs, one of which was earned, on a hit and a walk.

The Lady Bulldogs were to play the Mingus Lady Marauders in Cottonwood April 19. Winslow's last three games of the regular season are at home April 21 against the Deer Valley Lady Skyhawks, April 23 at Tempe against the Marcos de Niza Lady Padres and April 25 at home against the Notre Dame Prep Lady Saints. The Lady Bulldogs expect to be a playoff team.