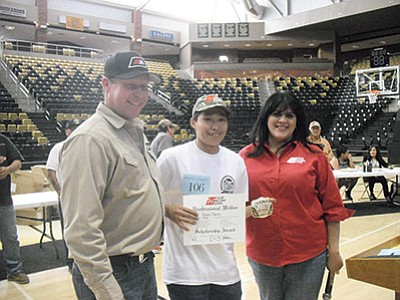 This is the second year in a row that Charley has won the grand prize for his welding.

In 1990, the Arizona State Legislature allowed Arizona public schools to join together to offer CTE state approved programs in their high schools. Tuba City High took the initiative along with six other reservation area high schools to form the NATIVE Joint Vocational District and those seven high schools together became satellite sites for Native to operate.

Currently there are 14 Joint Technological Education districts in the Arizona public school network that help high school students with career training before they graduate.

From culinary arts to welding, Native - CTE prepares students to enter a professional workforce immediately after high school or helps them transition to a community college or university.

Begay, who is an accomplished woodworker and graphic artist himself, was quick to recognize his staff as prime examples of hard work and serious discipline when it comes to starting a career. Begay pointed to welding teacher Ryan Goldtooth and automotive studies teacher Brent Engle as teaching mentors for his students.

"All the students did an awesome job representing Tuba City High School and their surrounding communities," Begay said. "These skills that they have learned will be used for a lifetime. It will take them places. I'm really just so proud of each and every single one of them."

The vision for Native is that "while supporting cultural identity, Native will also provide high quality learning experiences to succeed in tomorrow's workforce."

Through specific technical courses, Native Skills helps give students the solid foundation they need to pursue future careers. Partnerships with both universities and community colleges in Arizona and beyond allow students concurrent enrollment in dual credit classes during their high school career.

More information about CTE programs at Tuba City High School is available at (92) 283-1051.