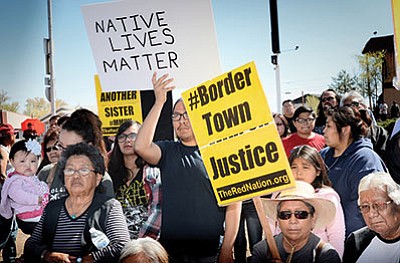 People gather at a vigil outside the Winslow Police Department April 2 demanding justice in the shooting death of Loreal Tsingine by a Winslow police officer. Todd Roth/NHO

WINSLOW, Ariz. - "No one deserves to be murdered like that," a tearful Florenda Demsey told a crowd of more than 350 gathered April 2 in front of the police station in Winslow, Arizona for a vigil to remember her niece Loreal Tsingine.

According to police, the 100-pound, five-foot tall Navajo mother was uncooperative and brandished a pair of scissors when she was apprehended by two officers who said she matched the description of an alleged shoplifter at a local Circle-K.

Shipley felt threatened by Tsingine, shooting her five times and killing her.

Ty Yazzie, a spokesperson for Tsingine's family, said police left Tsingine's body on the street until 6 a.m. the next morning while they cordoned off the scene to conduct the investigation. Many community members claim police ignored crucial eyewitness accounts of the shooting that put the officer at fault. They said police did not administer any life-saving measures to Tsingine such as CPR and they prevented eyewitnesses at the scene from administering aid. They also said the way Tsingine's body was treated was disrespectful to Navajo customs.

The Arizona Department of Public Safety is investigating the killing and the officer involved was placed on mandatory paid leave. Neither the city nor the police department has apologized or offered any support to Tsingine's family.

"Don't be afraid anymore," Demsey told the crowd. "We have to stand up and let [the Winslow Police Department] know enough is enough."

"She was executed in broad daylight," Melanie Yazzie said.

Yazzie is an organizer with The Red Nation, a group that helped organize Saturday's vigil with Tsingine's family.

"This officer did this because he knew he could do it with impunity," she said, touching on what many described as a pervasive climate of fear and intimidation by border-town law enforcement, especially toward Native women.

Several signs read, "Not another sister #MMIW" in reference to the thousands of murdered and missing Indigenous women in North America.

"We want the police department to leave!" Kee Begaye, a relative of Tsingine, said. "It's not just here, it's Flagstaff, Gallup and Farmington," he said.

According to the Guardian's database The Counted, Arizona law enforcement killed 44 people last year and has already killed nine people this year. Across the nation, in 2015 police killed 1,145 people and 269 people so far in 2016. African Americans, Hispanics and Natives, according to the database, experience the highest rates of death at the hands of police.

"We have to stand in solidarity with black and brown people," Wahleah Johns, a member of the Black Mesa Water Coalition and an organizer of the vigil, said.

Navajo Nation President Russell Begaye also attended, offering condolences to the family and the community. "Every Navajo life is precious," he said.

Angry at the lack of response by the city of Winslow, Begaye warned city leadership, "We will sue you if you don't rectify this."

Many demanded the Navajo Nation lead an independent investigation into the circumstances of Tsingine's killing and rampant police violence and discrimination against Natives in border towns. Begaye pledged the Navajo Nation's support for the family.

"We as a nation demand justice," he said.