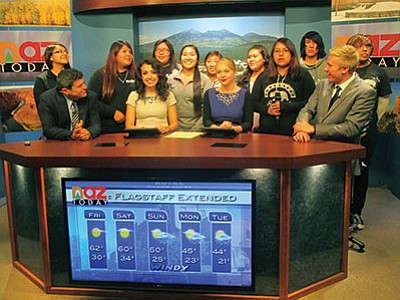 PHOENIX, Ariz. - U.S. Rep. Kyrsten Sinema blasted the Veteran's Administration and talked about a bill that would ensure more services for veterans, especially those considering suicide, during a Skype press conference with high school students from throughout the state.

Nine Hopi High media students were among the estimated 90 journalism students who attended from throughout the state.

Sinema pointed to the case of Sgt. Daniel Somers who during a two-year period failed to receive the appropriate care and the Army veteran was lost to suicide. During his time in the Army, Somers interrogated dozens of terrorists and couldn't talk about his time in the military because it was considered classified. He was enrolled in group therapy sessions, but wouldn't talk because if he did he might have given up information that was considered classified.

Sinema sponsored a bill in Congress so that veterans in Somers situation could receive appropriate care.

"No veteran or family should have to go through this," she said.

Kelly Johnson, a print journalism student at Hopi High, was happy she met NAZ newscaster Jennifer Miraval and had her photograph taken with her. During the ASU conference, Johnson met students from Mesa and Dobson high schools.

"Stephanie Liu was from Dobson High School. I met her because I had fallen into my chair and had accidentally hit hers. She sat by me and we were talking while doing our competitive writing assignments. She answered my questions and was helpful," she said.

Johnson said the time at NAU and ASU gave her pointers to become a better journalist.

"I know this will help me in the long run," she said.

Brenda Dacawyma, a video student at Hopi High, was impressed with the Native American Center at NAU,

"It was a pretty cool building and I like the way things looked and were set up. The thing I really like about the classrooms were the desks. The desks in the classroom were unique," she said.

"While we were there NAU students were practicing being on camera and how to act on camera," she said. "We even made an appearance on television."

Lindsey Honwynewa, a radio broadcast student at Hopi High, said she learned a lot about radio and media during the time at NAU. She was interested in the way the dorms and campus was set up and learned that the NAU security guards will walk students back to their dorms if they want them to do so.

Honwynewa liked a presentation by the 942 crew at ASU that showed "The Curtain of Distraction," which is a method used at home basketball games to distract the opposition from making its free throws.

Honwynewa was among several Hopi High students who participated in a session at ASU where they wrote a story for radio and then recorded it for radio.

Krienne Pahovama, an advanced radio student at Hopi High, said everything about NAU was amazing.

"I felt the NAU journalism group was more exciting while the ASU group had more seriousness and more information about writing stories and editorials," she said. "NAU has more people that have fun doing editorials while at ASU they're too serious in doing their journalism class."

Starlie Lomayaktewa, a print journalism student at Hopi High, said the trip to NAU and ASU was perfect.

"This trip has brought me closer to people that I don't really talk to. I have learned more about journalism and broadcasting. Going to both of these colleges has me think about what I would want to become after high school," he said.

Lomayaktewa said at NAU he learned about taking photos and using different types of cameras.

"Learning about the different areas of journalism was mind opening," he said. "Making films has always been my dream and I want to become a director when I grow up."

Lomayaktewa said at ASU he learned more about writing and radio.

"It was fun because we got to go on live TV., but it was also scary because some of us were asked questions," she said.

Puhuhefvaya, who has won a national award for writing, said she enjoyed a writing competition at ASU.

"Since joining journalism, I have more interest in becoming a better writer," she said. "So the writing competition came natural to me."

"I liked it because he showed us what NAU has to offer," Tso said. "They had a lot of great equipment and he pointed out how the students do not use it as much as they should be using. We even got to see one of his students set up for a shoot that he was doing the next day. He showed us the lighting system and told us which cameras and lights worked best together. He also showed us the dark room on the campus and talked about the importance of teaching his students the old ways of photography and not just the digital part."