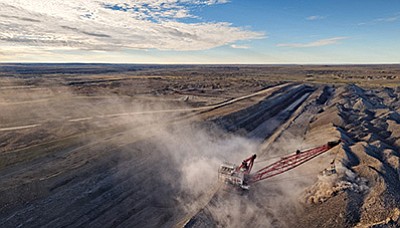 In a 3-0 panel decision, the court of appeals agreed with the NTEC, the Navajo Nation's owned coal company, that the district ruling in favor of environmental groups in Diné Care versus Office of Surface Mining Reclamation and Enforcement should be vacated and the case dismissed.

"NTEC is very pleased with this outcome on appeal," said NTEC CEO Clark Moseley. "The unfortunate decision of the Colorado District Court last year is no longer on the books and NTEC can now move forward with its operations on behalf of the Navajo Nation.

The decision means that the district courts decisions are no longer binding on the Office of Surface Mining and Reclamation and Enforcement (OSMRE) and cannot be used as persuasive authority in future challenges to the OSMRE's permitting decisions.

In March 2015, NTEC filed its appeal after the district court in Colorado ruled that OSMRE, the federal agency that oversees coal mines, violated the National Environmental Policy Act (NEPA) because the office did not analyze the burning coal at the Four Corners Plant, as indirect effects under NEPA, in its approval of an 830-acre mine plan revision at the Navajo Mine in 2012.

Following that decision, in April 2015, the district court effectively shut down mining in Area IV North of Navajo Mine, the center of NTEC's mining operations, even though the record before the court demonstrated that the injunction would likely cost NTEC, and ultimately the Navajo Nation as its owner, as much as $400,000 per month while operations were curtailed and would increase risks for Navajo workers at the mine, all for no environmental benefit.

Judge Paul J. Kelly, Jr., writing for the Court of Appeals, declined to find that the Court of Appeals lacked jurisdiction under the so-called "administrative remand rule," as urged by the environmental plaintiffs, and which would have left the district court's decisions intact.

NTEC argued that the case had instead become constitutionally moot while on appeal by OSMRE's compliance with the district court's orders on remand, and that out of fairness the district court's erroneous decisions should not be left on the books to potentially impact NTEC's future mining operations.

During the closure, Navajo Mine operations moved to seven days a week to provide the coal needed at Four Corners Power Plant.

"I want to thank all the Navajo Mine workers for demonstrating Navajo resiliency by adapting to conditions to ensure we continued to meet our obligations to Four Corners Power Plant," Moseley said.

The Navajo Nation, through NTEC, purchased the Navajo Mine in 2013 in order to ensure continued operations of the mine and its only customer the Four Corners Power Plant. Together the mine and plant provide hundreds of high paying jobs for Navajo tribal members and fund a substantial portion of the Navajo Nation's general operating budget through lease fees, taxes and royalties.

"This decision furthers Navajo sovereignty and self-determination for the Navajo people, said Steve Gundersen, chairman of NTEC's Management Committee. "Our operations at Navajo Mine demonstrate the forward thinking of NTEC and the Navajo Nation. We are an extension of the Nation and we are proud of the work we are doing to secure the economic future of the Navajo Nation and the Four Corners area."