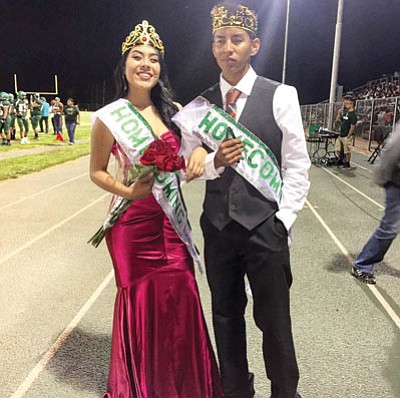 TUBA CITY, Ariz. - Last week the students at Tuba City High School celebrated homecoming week and chose a theme of "A Nation of Warriors" to celebrate all of the students and staff members from all over the country who live and work in their hometown.

Tuba City, in the Western Agency, is made up of three federally recognized tribes, Hopi, Navajo and San Juan Southern Paiute.

Among the tribal populations are non-Native community members , many of whom are service providers at the Tuba City Regional Health Care Corporation, the Bureau of Indian Affairs Western Agency, two high schools and at hotels, gas stations, fast food and restaurants that service the town - their children attend the seven public schools run by Tuba City Unified School District.

Students at Tuba City High are from these three tribes as well as other ethnic groups like Hispanic, Asian American, African American, Anglo, and additional tribes mixed into the student population include Sioux, Apache, Ute, New Mexico Pueblo, Cree, Hualapai, Supai and Cherokee.

This mix helps Tuba City High students understand and appreciate other cultures and customs even before they leave for college or explore new places off the reservation. The rich ethnic environment celebrates tolerance and culture - all the culinary, religious and life differences - making their transition to the outside world a much smoother and successful ride.

The theme was also carried out through the annual homecoming day parade on Sept. 25, which shuts down Tuba City's main street and has capacity crowds sitting along Warrior Pavilion Drive in uptown Tuba for most of game day.

Students selected long time Tuba City teacher and Hopi and Navajo tribe member Larry Tsingine as this year's parade Grand Marshall. Tsingine is from the Tobacco Clan of Hotevilla but has lived and worked in Tuba City his whole life. He is a popular, friendly, supportive staff member and was first choice as parade marshall by the student committee.

Winners of this year's homecoming royalty court are senior Shelby Skrelunas from Navajo, Hopi and Lithuanian heritage and senior Cordell Granger, who is Navajo.

Skrelunas and Granger received the most votes from students during homecoming week.

The remaining royalty court was:

A tough football game ended with a Chino Valley win against the Tuba City Warriors. The final score was 31-14.