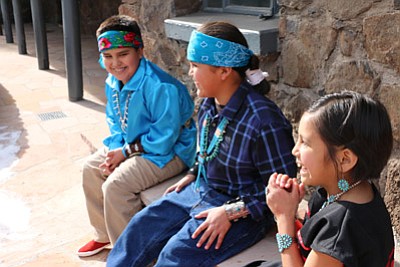 The grant, awarded by the Running Strong for American Indian Youth Foundation, will fund the Circles of Care project, WISE (Working in Support of Elders). Running Strong is a non-profit organization.

Billy Mills, a Native American Olympian, is the spokesperson for the Running Strong Foundation.

Marian Bitsui, public education coordinator at NACA, said to receive the grant from an organization that Mills is involved with was huge.

"The fact that he read our application and he liked our application," she said. "To know that we have his seal of approval is huge. I think that's amazing. I think it speaks volumes about their organization but also, I think, it says good things to me about what our community has to say and what our vision of wellness is."

She said that most of the ideas for the grant came from the community through surveys that asked the community what things were important to them.

"[We asked] what kinds of things do they want to see, what kind of events, what kind of programming, what do you want, basically, is what we asked them," she said. "A lot of different ideas came up. Some of them were sporting events, some were family events, but a main theme was cultural activities that taught them more about who they are, where they came from and how they can apply that to their day to day lives today in Flagstaff, being urban Natives."

The program is an elder/youth program where NACA hopes elders and others in the community who have trades, skills and information would add to the cultural knowledge of Native American youth

"It can be anything really that would add to our next generation," Bitsui said. "We're asking them to be facilitators once a month to host a lesson or an activity. In a nutshell, it's providing an avenue for elders to teach our youth and having a connection, that bridge that the community really said was lacking."

Bitsui said the Navajo and Hopi tribes have mathematicians, astrologers, scientists and chemists who take care of their land, of their agricultural and all of their teachings.

"We didn't want to stifle that, we are leaving it open ended because we do realize there is so much knowledge out there and we don't want to put a cap on it," she said.

NACA would provide the venue, food and any resource the elder might need.

"If they want to teach sewing, we would provide the fabric and the sewing machines," Bitsui said. "We will also be recruiting the children to come. We really want anyone younger than 18. We realize there are tons of children here in Flagstaff who want opportunities like this."

While the community asked for cultural activities, they also asked for sporting events. NACA recently put on a basketball camp and had a Native Strong conference during the summer. There will be a veteran's run in November. There is also the Fall Into Fitness and the Health Promotions programs have a constant stream of events.

"We are definitely trying to fill that gap, [too]," Bitsui said, adding that another gap they saw that the community wanted was language preservation. There is a staff member at NACA who is working on getting a program together to fill that need in the next couple of years.

"We really are focusing on what the community wants because, really, that is who we serve," Bitsui said. "The grant itself is a wonderful opportunity for us to exercise our ability to fulfill that need, to fulfill that gap."