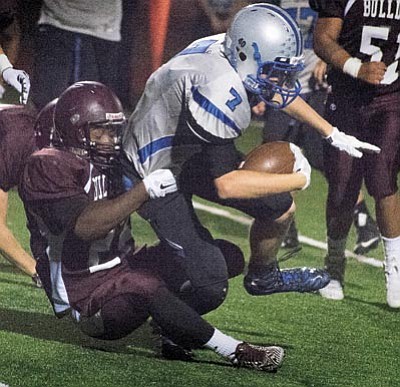 Things get much tougher for the Bulldogs on Friday when they journey to Show Low to meet the undefeated Show Low Cougars. The Cougars defeated Combs 49-22 Sept. 25 for their fifth win of the season.

Of the five teams left on Winslow's schedule three are undefeated and Payson is 4-1 with only a three point loss marring their season. Show Low, Blue Ridge and Snowflake are all 5-0 but all also have games against each other left to play.

The game started early at 6 p.m. because of the homecoming activities. Winslow took control of the game in the first half and was gaining good yardage both running and passing while holding the Falcons to negative running yardage in the first half. The Bulldogs played many younger players, some of whom had been on the junior varsity team.

The Bulldogs drove 48 yards and scored on their first possession. C. J. Chacon ran the last two yards of the 48-yard drive. Damon Avelar booted the conversion to give Winslow a 7-0 lead with eight minutes left in the first quarter. Nate Hollins accounted for most of the drive on a 31-yard run and a 12-yard pass reception.

The Falcons scored on a pass from Derek Weinreich to Ian Machiewicz to cap a 70-yard drive. The conversion run failed and Winslow still led 7-6 with half of the first quarter gone.

Winslow drove 49 yards on their next possession and scored on a nine yard run by Darrien Brown. The conversion failed and Winslow led 13-6 with about four minutes left in the first period. Winslow had the ball when the quarter ended with the Bulldogs leading 13-6.

The Bulldogs drove 61 yards to score on a four-yard run by Chacon. Avelar converted to increase Winslow's lead to 20-6 with 10:55 left in the half.

Winslow increased their lead on a 26-yard run by Akkeem Foster. The Bulldogs took only that one play to score after a 27-yard punt return by Brown set them up in scoring position. The conversion failed but the Bulldogs had a comfortable 26-6 lead with about half of the second quarter left to play.

The Bulldogs continued to pull away scoring the next time they had the ball on a nine yard pass from Rey Velez to Ricardo Villanueva. The conversion increased the lead to 33-6 with two and a half minutes left in the half. That was the score when the half ended.

Winslow drove 66 yards to score on their first possession of the second half. Chacon ran 27 yards for the touchdown.  Avelar's conversion increased the lead to 40-6 with most of the third quarter left to play.

After the teams exchanged fumbles Winslow drove to within the Falcons 20-yard line but the Falcons held and took the ball on downs. The Bulldogs returned the favor holding Fountain Hills on downs at the Winslow 16-yard line.

Brown ran 50 yards for an apparent touchdown that was negated by a holding penalty on the Bulldogs. The third quarter ended with Winslow leading 40-6.

Winslow scored on a one-yard run by Chris Padilla and got the two-point conversion on a pass from Velez to Jalen Lyons to increase the Bulldogs' lead to 48-6 with most of the fourth quarter left to play.

Fountain Hills scored in the last minute of the game on a 48-yard pass from Weinreich to Machiewicz with just 17 seconds left to play. Jacob Simon booted the conversion to make the final score Winslow 48- Fountain Hills 13.