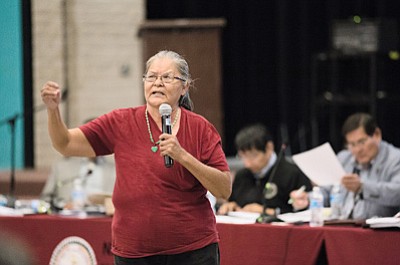 TUBA CITY, Ariz. - In an unprecedented move, the Navajo Nation Council came to Tuba City Sept. 24 to talk to the community about how the Bennett Freeze has affected them and to begin working on a plan to move forward.

The council and members of the Naabik'iyátí'Committee and Vice President Jonathan Nez met with members of the Forgotten People, a grassroots organization advocat-ing for the basic needs of former Bennett Freeze area residents. More than 300 people were in attendance.

"We have lost many of our people over 40 plus years, forced to relocate waiting for help to improve their living conditions," said Don Yellowman, head of the Forgotten People organization, in a letter to the committee. "The Navajo Nation's action is a historical event and rare opportunity for the people to begin working in cooperation with their leaders."

Navajo Nation Council Speaker LoRenzo Bates and Nez both emphasized that the former Bennett Freeze area was included in the One Nation, One Voice agreement, signed by the council and the administration in July, which outlined nine priorities for the Nation.

Speaking in Navajo, several area residents spoke about how the Bennett Freeze has personally affected them and what they want to see from the leaders of the Navajo Nation. Most residents want basic things like homes that are resistant to the elements or that fulfill basic needs that most people take for granted, including electricity and water.

Rene Ellis said that she was speaking on behalf of the elders who are barely surviving and for the Navajo women.

"We want homes that won't be blown over in the wind," she said. "We don't want trailers, we want good homes."

She said that families who do not have a big income pay out of their own pockets to build one-room structures one cinder block at a time and their kids have to move away to look for work.

"I've been through hunger, poverty and walked along the road trying to get somewhere," Ellis said. "We are poor. We want quality homes with a walk-in closet, where you can see your clothes and valuables stored inside. That's what we want."

One of the sticking points in moving forward has been the number of plans for solving the Bennett Freeze problem - from area residents to different committees, chapters, the Navajo-Hopi Land Commission, the Navajo Housing Authority and even the federal government, according to Nez.

"A lot of these plans, people do not share with each other," Nez said. "At our last meeting, we challenged everyone, 'Let's dust these plans off, let's put it on the table, let's try to consolidate all these plans into at least one working document.'"

Nez said he understands and agrees with the residents who spoke about the hardship of living in the areas affected by the Bennett Freeze.

"We need to start with the immediate needs out there, which is water, drinking water, and electricity," Nez said.

But he said the challenge for the families in the Bennett Freeze is master planning their family or clan areas to live in one area so resources can be made available.

"This is something that is happening all across Navajo where everybody wants to have a home built way in the rural areas but they don't want to be close to each other because I guess we want our privacy," Nez said. "But we just don't have the dollars to put in a waterline or an electric line to one house a mile here and another two miles on this side."

Moving communities closer together has advantages, he said. It makes development and bringing resources like water and electricity easier and, more importantly, it is justifiable through the Indian Health Services and through the Navajo Nation's general fund.

"We can't just do it to one family only," Nez said. "It is just not cost efficient. You have to have at least a few families. That is how these dollars are allocated from the federal government through Indian housing."

And that federal money is important because otherwise the Nation is spending its own money on housing.

"You can spend your own dollars, if you want," Nez said. He added that if community members want to live in rural areas off the grid that maybe they have to accept that they will not have access to water or electricity.

"We need to encourage them, if you want to live like that, then you might want to go with solar or hybrid well, or you're going to have to haul your own water," he said. "You need to understand that is what you're accepting if you want a home way, way off the grid. And some people like that."

He acknowledged that some of the younger people he meets do want to live off the grid and in more traditional ways.

"[They say], 'I want to live like my grandmother did and haul water and live with the land,'" Nez said. "They're fine with that. But they need to understand it's going to be hard to get you a million dollar water line out there if it is just one home."

In 1966, Robert Bennett, commissioner of the Bureau of Indian Affairs, ceased development of approximately 1.5 million acres of land that was in dispute by the Navajo Nation and Hopi Tribe. During the freeze, no development or improvements to any homes in the areas was allowed.

Moving forward, Nez said the Nation needs to work with the Hopi Tribe, water development and water rights that include the Colorado River.

"We need to figure out how to pipe some of that water in the Bennett Freeze area, too," Nez said. "The real challenge is to step back and look at it from the 40,000 foot level and say, 'We need a master plan.'"

Council members voted 15-0 to issue a directive to compile a list of people who were previously compensated for relocating and to have the nine impacted chapters complete right-of-way requests for electrical, waste and water lines by the end of February 2016.

"I'm hopeful that this new council with this new administration can work together to tackle some of these problems," Nez said. "I know it is not going to happen overnight but we're always open to this."