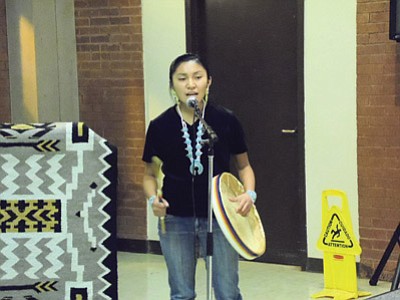 Tuba City High School student Mia Keeswood performs a song she wrote using a hand drum as accompaniment. She takes her Navajo language seriously enough to use in it her own creative process. Keeswood is an example of learning

At the Junior High Helena Begay will teach students about traditional songs and traditional social dancing. Mae Peshlakai will also show students what she knows about rug weaving.

A guest appearance by newly crowned Miss Navajo 2015-16 Alyson Shirley will take place in the morning and afternoon at the primary school Sept. 30 along with the current Miss Western Navajo.

The public is invited to the afternoon guest appearance by Shirley, who is from the Tolani Lake area. She is the 69th Miss Navajo Nation.

The new Miss Navajo is the daughter of Lenora and Stewart Shirley and the first grandchild on both her paternal and maternal sides of her family.

Shirley is an example of student role modeling for kindergarten through high school students. She will present at the Tuba City District next week. She is currently attending Chandler-Gilbert Community College and majoring in political science.

Shirley believes in speaking and knowing ones own tribal language and hopes to reinforce this in the Native student population for all schools and communities she will serve over the coming year.