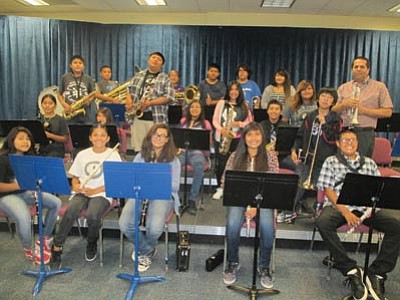 Dodd has taught music for more than 15 years, but this is his first year at Hopi High. He teaches beginning guitar, fundamentals of music and three band classes. He also plans to get a marching band going. The marching band hopes to have performances at homecoming and the Winslow Christmas parade.

'I want the students to learn to march. They need to represent the school and show that we have a band again," he said.

His approach to music seems to be catching on.

"So far, the Hopi High School students are mature and willing to do what I ask," Dodd said. "The junior high students are willing to learn and there have been no major discipline problems. I'm pleased coming to work here every day. The administration supports what I do, and that wasn't the case at my last school district."

In 1999, Dodd started teaching music in Thoreau, New Mexico where he worked with Native American students.

"I knew the kids out here have educational needs and I wanted to share my expertise," he said.

"I can give them the skills, give them examples. I can show them how to push the keys, then it's up to them to apply what they've learned," he said.

Dodd, who is Choctaw from Oklahoma, taught at Cibicue Community School and Navajo Prep before returning to Carlsbad School District.

Dodd has taught mostly high school, but he has also taught music to students in kindergarten through college. He has played the guitar, sax, clarinet and trumpet. Now, he plays the trumpet with the Hopi Jr../Sr. High School student bands.

Now, Dodd is working on his doctorate degree in advanced graduate studies. He will earn his degree from Boston University Sept. 25, but his commencement won't be until May.

While Dodd has his students play many genres of music, his preferences depend on his mood. His favorites range from Lee Greenwood's patriotic tunes to jazz to his students performing heavy metal. He also likes it when a performer mixes two genres. For example, he liked it when Taylor Swift blended traditional country with hip hop.

"Anytime music has a passion to it, it's good," he said.

He grew up in a musical family where his father David played the piano, bass and fiddle - mostly gospel and bluegrass.

"I started playing in the eighth grade. I picked up music quickly. I started with the tuba and trombone, but in college I learned all the instruments," he said.