Bulldogs can't hold on to lead in second half, fall to Coronado Dons 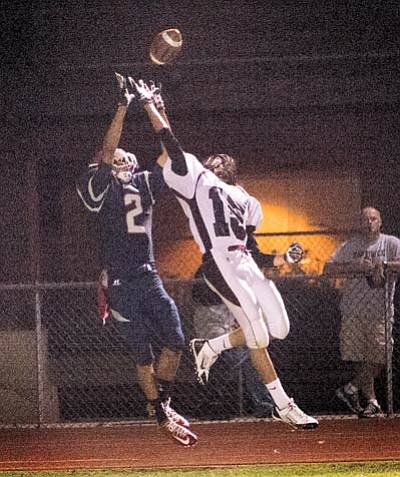 SCOTTSDALE, Ariz. - The Coronado Dons defeated the Winslow Bulldogs 35-21 at Scottsdale Sept. 18. The results left the Bulldogs with a 2-2 record and Coronado improved to 3-1 for the season.

The Dons came from behind and shut out the Bulldogs in the second half to erase a 21-14 Winslow halftime lead. The teams came into the game with even 2-1 records.  Winslow led at the half and the teams were tied entering the final period.

The Bulldogs struck first on a one-yard run by Akkeem Foster. The conversion by Damon Avelar gave Winslow a 7-0 lead early in the first quarter. A fumble recovery by Ahli Foster gave the Bulldogs the ball on the Coronado 35-yard line. A fourth down pass from Rey Velez to Darrien Brown kept the drive going thanks to a sensational catch.

The Dons drove to tie the score 7-7 when Victor Caison-Washington ran seven yards for the touchdown and Jay Vanderjagt converted. Coronado got the ball back on a Winslow fumble but could not take advantage of the break.

Winslow got an excellent punt return by Nate Hollins to the Coronado 35-yard line. The Bulldogs were within the shadow of the goal post when the first quarter ended but Coronado managed a much needed goal line stand and took the ball on downs at their four-yard line.

Avelar intercepted a Coronado pass and got Winslow the ball back in Coronado territory. Velez passed 15-yards to Brown for the touchdown and Avelar converted for a 14-7 lead with just less than nine minutes left in the half.

Brown ran 78 yards for a touchdown to cap a 99-yard Winslow drive. The conversion by Avelar increased the Winslow lead to 21-7.

Braden Pixley-Green returned the kickoff 84 yards and Vanderjagt converted to cut the Winslow lead to 21-14 with about half of the second quarter left to play. Both teams had treats but couldn't score and the half ended with Winslow leading 21-14.

Coronado scored on a 69-yard drive with about a minute left in the third quarter on a one yard run by Victor Beau Chalene and Vanderjagt's conversion to tie the score.

Victor Caison-Washington ran 51 yards for the touchdown that put Coronado ahead with 8:46 left in the game. The conversion kick was blocked leaving the Dons with a 27-21 lead.

AJ Hollis intercepted a Winslow pass and returned it 85 yards for a Coronado touchdown. Vanderjagt ran for the tw-point conversion and a 35-21 Coronado lead with about two minutes left to play.

The Bulldogs will play host to the Fountain Hills Falcons on Friday in their Homecoming Game.