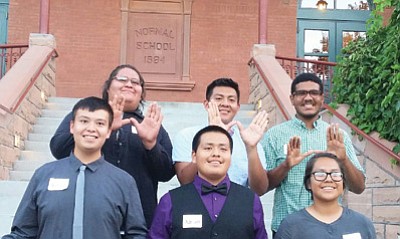 Parents received booklets to help orient them about how the Gates scholarship win would help their child have a successful college experience leading to graduation. The Gates Scholarship program encourages recipients to seek even higher academic success through additional graduate and doctoral work in their field of academic study.

During the dinner each Gates winner was introduced and invited to speak about their hometown community, their family background and their fields of study. It was a good opportunity for each of the new scholarship winners to meet other Gates recipients who are attending all three Arizona state universities.

The Bill and Melinda Gates Foundation, which was established in 1999, is backed by $1 billion in grants from the Gates Foundation to assist African Americans, American Indian or Alaska Native, Asian Americans or Pacific Islanders and Hispanic students who have shown exceptional academic promise and have demonstrated leadership through community service, extra curricular activity and have made a GPA level of 3.5 or higher and have met federal Pell Grant eligibility.

The Gates Millenium Scholars program is intended to ensure that "a stronger America is built through improved education opportunities for all exceptional minority students," according to the Bill and Melinda Gates Foundation website.

The scholarship win ensures that these motivated, gifted and academically disciplined students can attend the college of their choice with the financial backing they need. They are encouraged to pursue both graduate and doctoral work as well.