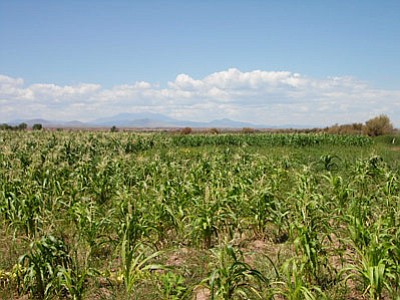 With the sacred San Francisco Peaks in the background, the North Leupp Family Farms, which is 100 acres in total, yields rows and rows of emerald green leaved corn stalks. Photo/Rosanda Suetopka

LEUPP, Ariz. - The North Leupp Family Farms (NLFF) is just a couple of miles off Indian Route 2 on the left hand side of the reservation road after crossing past the Leupp Chapter and school, which leads to the Kykotsmovi end of the Hopi reservation.

The small homemade green farm sign with one single arrow points to the entrance. Rows and rows of emerald green leafed corn grows under the eye of the San Francisco Peaks directly west of the corn fields.

It is a beautiful sight, the corn, squash and summer melon crops thrive in the hot desert sun where rain and moisture is sparse.

The dedication and commitment of 30 local Navajo families intent on growing their own food and making North Leupp Family Farms (NLFF) a continued success is what drives them each year to produce and market their crops.

Stacey Jensen, the president and manager of the farm, was busy thanking visitors and talking about the freshly harvested fields with non-Native guests from Flagstaff and Chino Valley who were there to support the Navajo farm activity. He made sure everyone had somewhere to sit in the shaded awning near the open fire pits where women from NLFF were roasting mutton ribs, stirring mutton stew made with fresh white corn and squash and frying bread for the potluck style lunch.

Special guest Jesse Thompson, with the Navajo County Board of Supervisors, carried around a fresh 25 pound bag of Navajo blue corn and talked with some Asian visitors who had driven from Flagstaff to the NLFF to see a "real Indian farm."

Thompson explained to them how Natives have always grown their own food and like to have food celebrations, like the public feast at NLLF, to share their hard work and bounty, even with strangers who happen upon their land.

"It's our Indian way to share and give thanks to our Creator for providing for us and for us to share that special gift of food to others, food that provides not just physical sustenance but spiritual care as well," Thompson said.

Thompson's words of appreciation for the farm produce echoed throughout the day, especially with the 30 Navajo farmers who make up the NLLF.

Many of the farmers spoke of their days of hardship when the farm was originally started more than 30 years ago. Now they are seeing the fruits of their labor with more production, better pricing for their produce and possibly a better money making idea - Navajo blue corn production.

Betty Thompson Kelly, age 90 and one of the oldest members of the NLLF, spoke to the crowd about what she learned from growing her own food and how that produce was made into traditional Navajo food, like kneel down bread.

Thompson Kelly held up an ear of white corn that had been grown on the farm.

"This is what we are thankful for," she said.

Another special guest at the NLLF celebration was Wenona Benally Baldenegro, who made a run in 2012 as a Democratic candidate for the U.S. House of Representatives for the 1st Congressional District in Arizona.

Baldenegro was at the farm event to support "investing in small Native businesses and [how] to rebuild rural infrastructures like the NLLF as a way to help create jobs in a small reservation agency town."

Baldenegro spoke briefly at the mike, but mostly talked with individuals who had come to share the day with the farmers.

Jensen, who runs the NLLF on a daily basis, has a lot of experience in managing farm operations. He was born in nearby Winslow. He started out working in a garden nursery with three big greenhouses. He learned not only how to run a successful greenhouse but also how to build one. He said that even now he still enjoys building greenhouses.

Jensen, who came to the NLLF operation in 2005 as an agricultural intern, said his mentor was local farmer Justin Willie. Willie was a prime example of how to grow crops not just for personal use but for the community's sustainability.

"Farming is fast becoming a lost tradition and practice for our people," Jensen said. "We are too dependent nowadays on readily available and processed foods. We need to get back to farming, not just for our physical health but also for our spiritual well being. I hope at some point, I can just leave the farming operation on its own, I can sit back and shut up while watching our youth take over the operation and decision making. And now with our recent move to a 501c3 tax exempt operation, that has been the biggest surprise for us. Many said that it was too soon, we weren't ready, but we are... now we can go after bigger government grants to support our production but we still want to maintain our independence as a community project."

During the noon meal, live music was provided by two local Navajo bands, Davis Mitchell and Ray Stane and their musical partners. The women cooked, which included butchering two sheep to make the stews and side roasted mutton ribs and grilled achii'.

The farm fest ended with a tour of the farm sites, including the greenhouse where fresh kale and spinach are grown. There were cash sales during the day for zuchinni, yellow squash, corn, melons and blue corn.