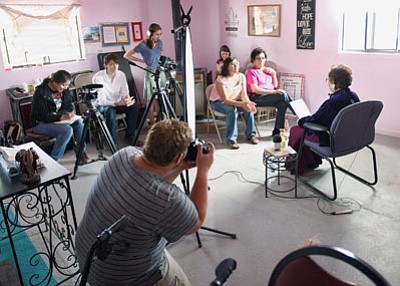 TSALIE, Ariz. - The life stories of four Navajo elders are featured in a student-made documentary film, which will premiere at Diné College in Tsaile, Arizona Sept. 14 at the College Museum.

The premiere and reception begins at 5 p.m. on the fourth floor of the Ned Hatathli Center and is free and open to the public.

The students who participated in the 2015 Navajo Oral History Project, wrote, edited and produced documentary films that will be archived at the Navajo Nation Museum and Library, and the Smithsonian Institution's National Museum of the American Indian.

The premiere will feature commentary from faculty and students of both Diné College and Winona State University.

The documentaries are part of a collaborative project led by Dr. Miranda Haskie, a professor of social and behavioral science at Diné College and Dr. Tom Grier and Robbie Christiano, from the mass communication department at Winona State University.

During the sixth year of the Navajo Oral History Project, student teams completed service projects for the elders and interviewed each elder several times. They also interviewed family members and conducted background research while on the Navajo Nation.

DVD copies of the student-produced films will be available for sale for $20 each, with all proceeds going to a scholarship fund at Diné College.

The Diné College students involved in the 2015 Navajo Oral History Project are:

The Winona State University students involved in the 2015 Navajo Oral History Project are: