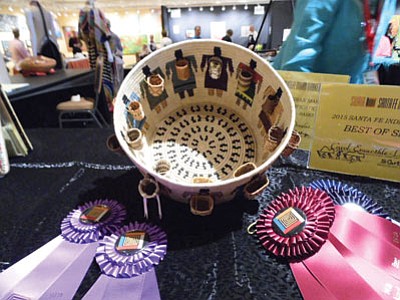 SANTA FE - Chief Operating Officer Dallin Maybee of the Southwestern Association for Indian Arts (SWAIA) in Santa Fe, New Mexico announced the Best of Show winner for 2015 this past weekend. That announcement will change the life, notoriety and art sales of the artist who took the highest, most prestigious American Indian art prize in the world.

The Best of Show winner this year is Northern Arapaho and Seminole basketmaker Carol Emarthle-Douglas, 56, of Bothell, Washington.

Emarthle-Douglas created a detailed basket titled "Cultural Burdens" that showcased both her own regional basketry techniques and materials and symbolized the role of tribal women as carriers of culture.

While winning any SWAIA award is certainly a very special art recognition for any American Indian artist, none is more significant than the Best of Show award.

This single highest art award from SWAIA will propel and create high demand for the artist's winning work and change their art career significantly.

The Best of Show award is selected by a panel of judges from a diverse range of art mediums that are submitted by the most talented and noted American Indian artists from all corners of the nation.

When Emarthle-Douglas stepped up to receive her award, she was grateful, saying "I am so honored."

Emarthle-Douglas's winning basket took her more than three months to complete since it features one large basket and 22 miniature baskets attached on both the inside and the outside of the larger main piece. The main basket is made from contemporary materials, hemp core coiled with waxed linen thread.

Emarthle-Douglas said she used a variety of basket making techniques that were reflective of not only her own Seminole heritage, but also basket weaving techniques from Woodlands, Cherokee, Plains and Apache tribal basketry.