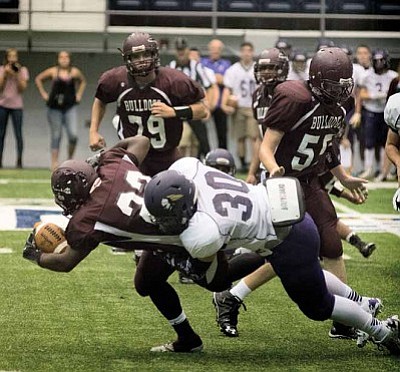 WINSLOW, Ariz. - The Winslow Bulldogs began a challenging football season with a 27-20 loss to a much larger Lake Havasu Knights team.

The Bulldogs were impressive and showed reasons to see the team as playoff contenders. The teams on the Winslow schedule also began their seasons with a number of successful early games.

Friday's opponents, the Holbrook Roadrunners, defeated the Camp Verde Cowboys 25-12 in their opening game. The Wickenburg Wranglers lost a close game 42-34 to the Dysart Demons and will be at Glendale next. The Wranglers will be in Winslow on Sept. 11 for Winslow's first home game.

The Coronado Dons were edged by Glendale 24-21 and will be at Cortez next. The Dons are scheduled to host the Bulldogs Sept. 18. The Fountain Hills Falcons will travel to Winslow Sept. 25. The Northwest Christian Crusaders blanked the Falcons 49-0 in their first contest. The Falcons face Estrella Foothills next.

Things get tougher for the Bulldogs in October when they journey to Show Low to meet the always formidable Cougars. Show Low defeated Round Valley 34-7 and Chinle 47-0 in its first two contests and will meet a tough Florence Gopher team Sept. 11.

The Bulldogs then go to Payson to meet the Longhorns Oct. 9. Payson defeated Window Rock 57-6 in its opening game and will play St. Johns next. Winslow will play host to the Page Sand Devils team Oct. 16. Page defeated the Tuba City Warriors 29-8 in their opener but was clobbered by the Florence Gophers 54-0 on Saturday. Their next game is against the Monument Valley Mustangs. Monument Valley is 2-0 with wins over Greyhills Academy 18-8 and Window Rock 39-20.

The usually formidable Blue Ridge Yellowjackets will play host to Winslow Oct. 23. Blue Ridge edged St. Johns 8-6 in its opener and is slated to host Walnut Grove next.

The last game of the regular season should be a challenge for the Bulldogs when they meet the Snowflake Lobos in Snowflake on Halloween. The Lobos won their first two games defeating Tucson Amphitheater 40-0 and a tough Tempe Prep squad 19-0.

Other teams in the area with notable starts include the Mingus Marauders who defeated Cactus Shadows 42-15 and Lee Williams 42-0 and Coconino which lost to Cactus Shadows 61-6 and defeated Youngkers 27-14. Flagstaff started with a 27-14 win over Phoenix North High School.